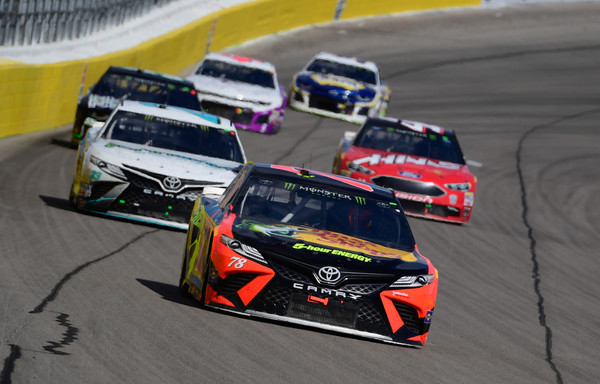 Martin Truex Jr. started fourth, finished fourth and moved into fourth in the driver point standings.
But in order to get a solid fourth-place result in Sunday’s NASCAR Cup Series race at Las Vegas Motor Speedway the Furniture Row Racing driver had to overcome obstacles during the 267-lap race.
A couple of pit-stop problems along with handling issues at different times of the race had Truex fighting for track position on the 1.5-mile oval.
“We started fourth and finished fourth and it looked pretty easy but we had a lot to overcome,” said Truex. “A lot of stuff going on. Track position was the name of the game and it was really hard to pass.
“We had some trouble on pit road a few times and also had a few runs when the car was off as well. Just a tough day, we battled through it and came home with a good result. Proud of everybody on the Bass Pro Shops/5-hour ENERGY Camry. Looking forward to the next couple of weeks and see if we can continue to chip away at it.”
When Truex took the checkered flag it was his 10 straight top-five finish on a 1.5-mile oval.
Truex’s No. 78 Bass Pro Shops/5-hour ENERGY Toyota was strong early, finishing second in the first stage. He had issues to overcome in the second stage but was able to collect a few more standing points, finishing seventh.
When the race was restarted following the final caution on Lap 183, Truex found himself in 10th place. But the gritty driver from Mayetta, N.J. fought to the end to finish fourth. His last pass to get to fourth came with fewer than five laps remaining.
“We’re going to go back to work,” stated Truex. “We’ve got some things coming that we’ve been working on. We just can’t get the balance of our car where we need it. Been struggling with getting the car to turn good enough these last two weeks and when we get that figured out we’ll be right there.”
With Truex moving from seventh to fourth in the point standings, it is the same position he was in after last year’s race in Las Vegas.
The Pennzoil 400 race winner was Kevin Harvick. Rounding out the top-10 in order were: Kyle Busch, Kyle Larson, Truex, Ryan Blaney, Brad Keselowski, Joey Logano, Erik Jones, Paul Menard and Aric Almirola.
The race had 11 lead changes among six drivers (Truex led six laps) and there were four cautions for 29 laps.
The next race is Sunday, March 11 at Phoenix Raceway.
FRR PR/Photo Robert Laberge/Getty Images