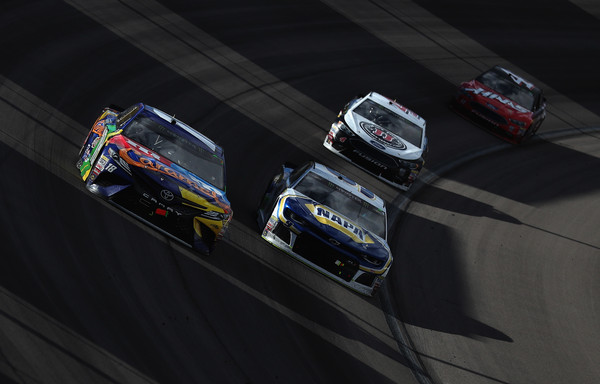 ● The M&M’S Caramel Toyota was fighting a loose condition on the first run of the race, so crew chief Adam Stevens dialed up air pressure and wedge adjustments on the first pit stop of the day on lap 38.

● Still, Busch was fighting an ill-handling car, but the issue had flipped 180 degrees from the first run, with Busch dealing with a now tight-handling car.

● Busch came in for service on lap 83 following the end of Stage 1, where Stevens threw an air pressure adjustment at the M&M’S Caramel Toyota to try and find a happy medium between the loose and then tight handling conditions.

● The Las Vegas native held the seventh spot for the first 50 laps of Stage 2 while still battling a tight condition.

● Stevens kept throwing wedge and air pressure adjustments at the M&M’S Caramel Toyota during stops on lap 124 and 163, and Busch moved up to the top-five at the end of Stage 2.

● Another fast stop by the M&M’S Caramel team vaulted Busch to second at the start of Stage 3.

● Busch fell to sixth on the restart but methodically worked his way up through the field during a long green-flag run to end the race.

● Smart strategy by Stevens had Busch wait until lap 230 to pit for the final time under green. Many of the leaders short pitted while Busch led until his stop.

● The strategy saw Busch on fresher tires toward the end of the race, as he moved to fifth on lap 237 and up to second by lap 246.

● However, the strong car of Kevin Harvick was just too much for Busch to chase down for the win.

● Busch posted his first top-five finish of the NASCAR Cup Series season and the 162nd top-five of his career.

● The Las Vegas native scored his sixth top-five finish in 14 career starts at the 1.5-mile oval.

“Our M&M’S Camry was really strong there the last 100 laps of the race. Early on, just having to start the race on our qualifiers (tires) was really bad for us, and then we over-tightened and over-adjusted for the second run. From there we were making small tweaks to it to get it back. It was rolling fast the last 100 laps or so. A lot of those guys would go and short pit on the long side of it, and I think that helped us too getting back up through those guys. The M&M’S Caramel Camry was good, and Adam (Stevens, crew chief) and the guys did a great job this weekend. We came here and prepared well. They did a good job through practice getting us a great racecar. There was no catching that 4 (Kevin Harvick), he was on rails today and lights out. I don’t know what we need to do to catch up and get better like those guys, but certainly we have some work to do, especially here at Vegas and some other places we go to; maybe we’ll get closer. It was a great day for us, and we’ll go to Phoenix.”

What did you need to contend for the win in Las Vegas?

“Just needed to be closer to the car to see if I had a chance to race him (Harvick) through traffic. We were just so far back, by the time he’d get through traffic, I’d get the traffic and I’d get held up, and he’d drive away. We were kind of accordioning back and forth that last two runs of the race. Overall, a great M&M’S Caramel Camry. The guys did a great job bringing a really great car. I wouldn’t say we were far off. We were really, really loose to start the race, and we adjusted on it and got better and a lot closer as the day went.”

Is there any consolation in a second-place finish?

“Definitely, second is fine if you get beat as bad as we got beat. We’ll take that finish. It was a win for the field as the 4 (Harvick) was a class of his own. Our guys did a great job. We worked really hard to fix the balance of our car today and had a good race car in practice yesterday. Real proud of Adam (Stevens) and the boys. Seems like we are able to do those things, I just don’t remember the last time I had as dominant of a car as the 4 car the last couple of weeks. We just have to go to work and try to figure it out and fix it and get ourselves to that level.”

Next Up: The next event on the Monster Energy NASCAR Cup Series schedule is the TicketGuardian 500k on Sunday, March 11 at ISM Raceway near Phoenix. The race starts at 3:30 p.m. EDT with live coverage provided by FOX.