Flat Tires Leaves Reed with a 19th-Place Finish in Vegas 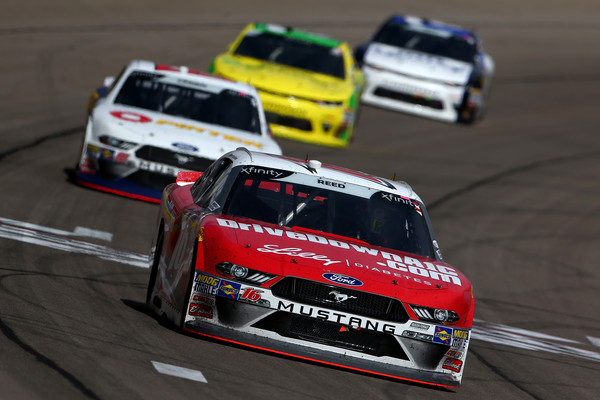 Ryan Reed qualified his No. 16 Drive Down A1C Lilly Diabetes Ford 13that Las Vegas Motor Speedway and was poised for a solid top-10 finish until a flat tire derailed his efforts.  Reed was able to only lose one lap and salvage a 19th-place finish Saturday afternoon in Vegas.

“I feel like we had an outside shot at a top-10 and it sucks we tore it up a little bit,” said Reed.  “We have to get better at the smooth 1.5 mile tracks. I think we had more speed at Atlanta. Our Ford Mustang has a little bit of work to do but we will get there.”

The No. 16 was a little tight over the first 45-lap Stage, but Reed was able to maneuver his way around the 1.5-mile track and close out the first Stage 11th.  Reed came down pit road at the conclusion of the Stage for four tires, fuel and a track bar adjustment.  The jack broke on the stop, costing time on pit road, which left Reed starting Stage 2 from 16th.

Over the course of Stage 2 the handling shifted to extremely loose and by the conclusion of the Stage Reed was 19thand ready for some chassis adjustments.  Crew chief Phil Gould made a big swing with handling before the start of the final Stage with packer, track bar and air pressure adjustments.

Reed started the final Stage 17th and steadily began working his way through the field.  While running 12th with 16 laps remaining the right front tire went flat on the No. 16 Ford, resulting in an unscheduled trip down pit road for repairs.  The team was able to change the tires and get Reed back on track just one lap down.  Despite having some damage to his Ford, Reed was able to drive his No. 16 Drive Down A1C Ford to a 19th-place finish.