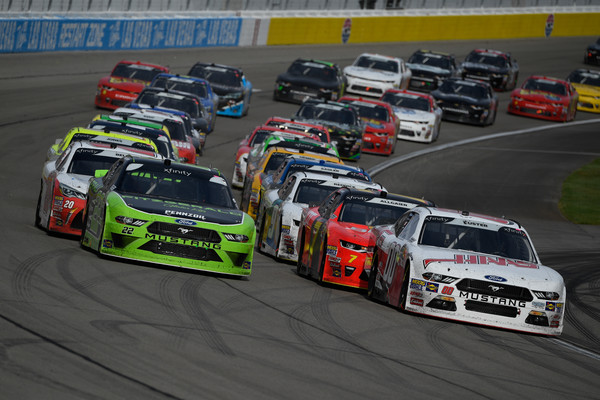 ● Custer piloted the Haas Automation Ford in and out of the top-10 while noting that his car became tighter as the stage wore on.

● He pitted at the conclusion of the stage for four tires, fuel and air pressure adjustments. The quick pit stop earned Custer three positions off of pit road.

● Custer battled the Haas Automation Ford Mustang inside the top-five for the majority of the stage.

● At the conclusion of Stage 2, he pitted for four tires, fuel and air pressure adjustments. He gained one more spot on pit road.

● Custer fought to the second position on the initial restart and consistently ran in the top-three for the first half of the stage.

● On lap 132, Custer pitted for four tires, fuel and adjustments. The quick stop by the Haas Automation pit crew vaulted Cole to the lead off pit road.

● Custer ran in and out of the top-five until a lap-189 caution. He restarted in sixth place and held the Haas Automation Ford inside the top-10 for the remainder of the 200-lap race.

● This marks Custer’s first Xfinity series top-10 at Las Vegas and first top-10 of the season.

● Kyle Larson won the Boyd Gaming 300 to score his ninth career Xfinity Series victory, first of the season and first at Las Vegas. His margin of victory over second-place Christopher Bell was .881 seconds.

“I thought we had a solid Haas Automation Ford Mustang. I thought we had a top-five car. We just didn’t have the best restarts and I think that is what hurt us the most. I was happy with how much speed we have. We will be able to build off that. We definitely wanted more but the restarts just weren’t there today. Some runs we were really good on the long runs and some we were better on the short runs. It could go either way. I think you need the balance of both.”

The next event on the NASCAR Xfinity Series schedule is the DC Solar 200 on Saturday, March 10 at ISM Raceway near Phoenix. The race starts at 4 p.m. EST with live coverage provided by FOX.