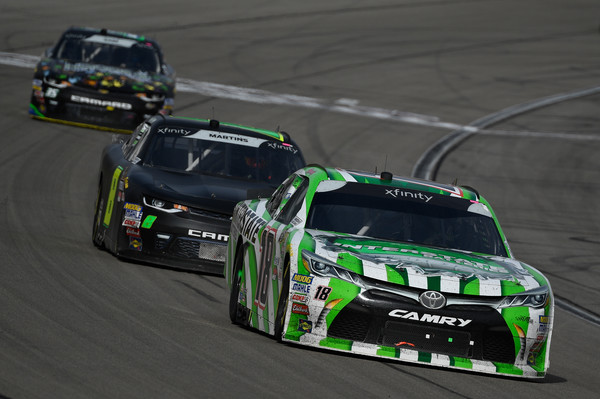 ● Busch started within the top-five and held his spot there for the first stage, sitting third on lap 37 and fourth at the end of the stage.

● The Interstate Batteries Camry was very loose for the first 45 laps, with Busch asking for more rear grip, in particular in the right rear.

● The Las Vegas native made his first trip to pit road on lap 48 for four tires, and drastic trackbar and air pressure adjustments.

● On the lap 48 pit stop, the left rear tire had a tough time coming off, taking precious seconds and dropping him to eighth on the ensuing restart.

● Things did not improve following the restart, with Busch still struggling with a loose race car, especially entering the corner.

● All the Interstate Batteries driver could do was hold onto his car until he could come to the attention of crew chief Eric Phillips and team following the end of Stage 2.

● Busch restarted 12th on lap 98 to start the final stage, but still struggled with a loose racecar, as issues with right rear grip held the Interstate Batteries driver up from making his way towards the front.

● With the handling issues, Busch and Phillips decided to pit a bit earlier in the window for the final pit stop, coming to pit road on lap 166. But on the stop, the team was penalized for improper fueling, as the gas man touched a tire with his hand as it rolled over to the wall. The new 2018 rule states that the fuel man cannot do anything but fuel the car, thus the penalty had to be issued.

● The penalty put Busch two laps down and in 20th place.

● A late race caution enabled to Busch to take the wave around on lap 187 to get one lap back, and another quick caution on lap 190 enabled Busch to get back on the lead lap.

● While he returned to the lead lap for the final eight circuits, Busch was out of fresh tires. With many other in front of him on fresher tires, all Busch could do was bring home the Interstate Batteries Camry to a disappointing 14th-place finish.

● Kyle Larson won the Boyd Gaming 300 to score his ninth career Xfinity Series victory, his first of the season and his first at Las Vegas.

“We were just off the whole race. Our Interstate Batteries Camry was just way too loose and we burned the rear tires off it halfway through every run. We’ll go back and talk about it and try to figure out what went wrong.”

The following are the race results of Busch’s Team Interstate teammates in Saturday’s Boyd Gaming 300:

● Brandon Jones, driver of the No. 19 Menard’s Toyota, finished 7th.

Next Up: Busch will return to the No. 18 Toyota for the next event on the NASCAR Xfinity Series schedule, the DC Solar 200 on Saturday, March 10 at ISM Raceway near Phoenix. The race starts at 4 p.m. EDT with live coverage provided by FOX.