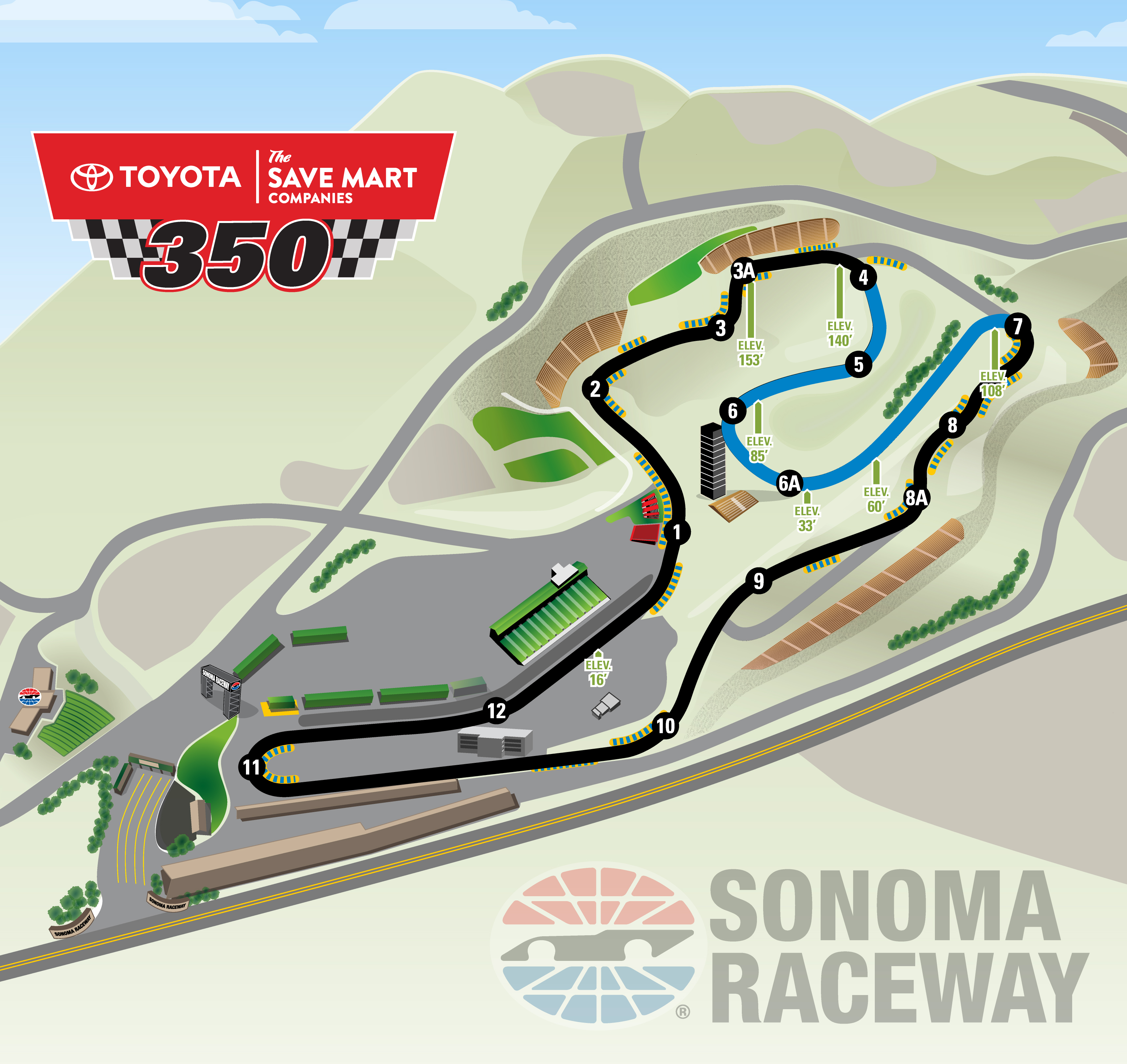 The full track layout, which was originally unveiled when the raceway opened in 1968, incorporates the raceway’s signature sweeping downhill corner known as “The Carousel.” The Carousel plunges from Turn 4, down through Turns 5 and 6 and navigates a more than 200-degree radius turn before dropping onto the raceway’s longest straightaway into the Turn 7 hairpin.

“The Carousel is a corner where history has been made, and as we celebrate the half century of track history in 2019, we are excited to re-introduce this signature turn on the Sonoma Raceway circuit,” said Steve Page, Sonoma Raceway president & general manager.  “We look forward to seeing a new generation of racers battle through this challenging corner and create moments fans will remember 50 years from now.”

The Carousel has been the site of many memorable moments in the raceway’s history, including Dale Earnhardt’s critical pass of Mark Martin in 1995 resulting in the Intimidator’s first-ever NASCAR road-course victory.

“Innovation and exceeding expectations is in the DNA of SMI. This is something fans and drivers have been talking about for years, and we are excited to bring it to them, particularly as part of the track’s 50thanniversary,” said Marcus Smith, CEO of Speedway Motorsports, Inc.

NASCAR utilized the full 12-turn course beginning with its first Pacific Coast Late Model Division race at then-Sears Point Raceway in 1969 through numerous Cup Series, West Series, Southwest Series and Truck Series events until 1997. Since 1998, NASCAR has competed on a shorter, 1.99-mile configuration, which utilized a bypass connecting Turns 4 and 7 known as “The Chute.” The 2019 Toyota/Save Mart 350 is expected to run 85 laps and the race distance will remain 350 kilometers.

“The carousel adds a technical aspect to the track that will be a challenge for the drivers. I’m looking forward to the FOX broadcasts of the race weekend next year and analyzing how the teams deal with this new challenge,” said Gordon, a five-time Sonoma winner.

The Monster Energy NASCAR Cup Series returns to Sonoma Raceway for the 2019 Toyota/Save Mart 350, June 21-23. Sonoma Raceway will celebrate its 50th anniversary season throughout the year and will announce additional plans in the coming months. For more information on upcoming raceway events or to secure tickets for 2019, visit www.sonomaraceway.com or call 800-870-7223.

WHAT DRIVERS ARE SAYING:

“Bringing the Carousel back is like going back in time, not only for the racetrack, but for NASCAR in general. In my beginning days running at Sonoma, we ran the Carousel in the Southwest Tour, Winston West, the Trucks and the Cup cars have had so many great races there. I think this is truly what Sonoma Raceway is, and I think this just adds a great piece of the race track back into the mix, and it will be great for the fans too. To have something new and exciting and seeing SMI have another built-in story before the season even starts is really exciting.”

“Wow, the racetrack’s going back to the Carousel? This is incredible. I just missed out on running Featherlite Southwest Tour races there on the old circuit. The first year I went there was 1998, ran in what was the first year of the Chute and then they rearranged it to Turns 4 straight to 7. This is incredible. I’ve always wondered why we didn’t run the Carousel, and they said it was because fans couldn’t see it. Then they bulldozed the big dirt mound that was in between and you watch sports car guys do it all the time, you watch Indy cars do it all the time. I was like, ‘well, why don’t the NASCAR guys do it?’ This is perfect. This is an incredible opportunity with it being the 50th anniversary of Sonoma Raceway.”