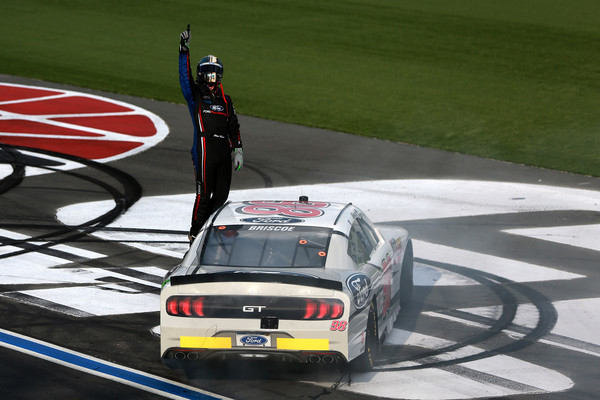 ● Dropped from ninth to 12th in the opening lap while battling in traffic.

● Pitted under green from 11th on lap 12 for four tires and fuel.

● The early pit stop allowed him a better starting spot for Stage 2.

● Took the lead on lap 17 just seconds after the green flag flew to start Stage 2.

● Briscoe again pitted early and dropped to tenth in order to gain a better starting position for the final stage.

● Took the green flag to start the stage and led until the checkered flag.

● Briscoe’s victory in the Drive for the Cure 200 presented by Blue Cross Blue Shield of North Carolina marked the 55th overall win for SHR.

● Five cautions slowed the race for 10 laps with 30 of the 40 drivers finishing on the lead lap.

● Saturday’s victory marked the second win for the No. 98 team. Kevin Harvick won on Feb. 24 at Atlanta Motor Speedway.

Chase Briscoe, driver of the No. 98 Ford Mustang for Stewart-Haas Racing with Biagi-DenBeste:

“I need to thank Ford Performance, Tony Stewart, Gene Haas, Fred Biagi, Bill DenBeste and everyone on the No. 98 and at SHR for the opportunity they gave me this year and this car today. I was holding back tears the last couple of laps. This year has not been by my standards anywhere near where it needs to be. We’ve wrecked a lot of race cars and I think my best finish was ninth, so I was really down on myself personally. I was just waiting for the caution to come out. I knew it was gonna come at some point and the restarts were crazy getting down into one. Luckily, the good Lord upstairs didn’t bring a caution and we were able to hold on.”

The next event on the NASCAR Xfinity Series schedule is the Bar Harbor 200 presented by Sea Watch International on Saturday, Oct. 6 at Dover (Del.) International Raceway. The No. 98’s next race is the Kansas Lottery 300 on Saturday Oct. 20 at Kansas Speedway in Kansas City with Briscoe behind the wheel.