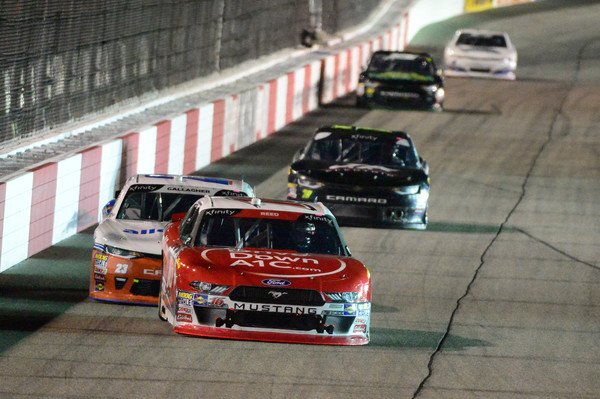 Ryan Reed started at the tail end of the field after a rear suspension issue surfaced in round two of qualifying.  Despite the setback, Reed methodically worked his way forward throughout the course of the race and in the end was able to capitalize on track position to earn a 10th-place finish in his No. 16 Drive Down A1C Lilly Diabetes Ford.

“For the first round of qualifying I thought we were better than the second round and it turns out one of the track bar bolts came loose,” said Reed.  “So we had to start in the back because we had to fix that before the race. We fought all night. The balance was up and down. There were points where we felt really good. We got a good break there on the second to last restart and got some good track position and held on to it right there. We definitely recovered and got the car better, but we need to bring more speed. I think a top-10 makes us somewhat of a contender but if we are going to make any kind of a deep run we need to do better than that.”

Reed solidly advanced to round two of knockout qualifying Friday at Richmond before an issue surfaced in the rear suspension.  The team took the No. 16 behind the wall and determined parts needed to be changed to race under the lights Friday evening at Richmond.  Due to the change, Reed started at the back of the field for the drop of the green flag.

Stage one went caution free and Reed was able to work his way all the way up to 19th to close out the 75-lap opening segment.  The team serviced his Ford with a few adjustments at the stage break and Reed lined up 16th for the second stage.  The No. 16 still lacked forward drive, but Reed was still able to make up a few positions to finish the stage 13th.

Reed took the green for the final stage 13th after a pit stop for four tires, fuel and an air pressure adjustment.  The handling continued to be a little free through the entry, but Reed continued to advance.  Multiple cautions at the end brought on three and four wide racing.  Reed capitalized making the bottom lane work and picking up multiple positions to earn a 10th-place finish at Richmond.