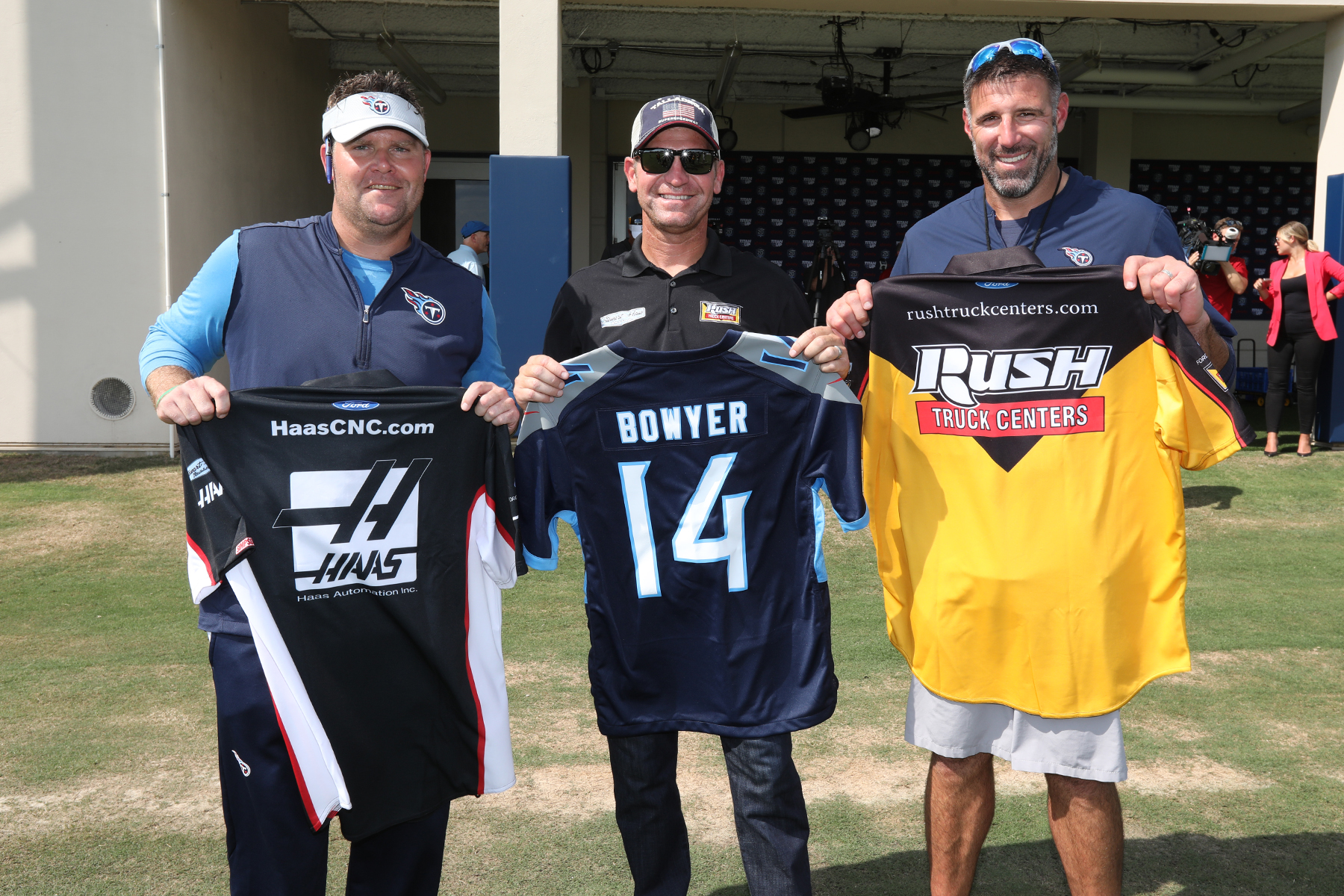 When Clint Bowyer comes to Talladega Superspeedway in a few short weeks for the 1000Bulbs.com 500 on Oct. 14, you can bet he will act like a Titan to take home the Cash and the victory which could automatically propel him into the next round of NASCAR’s Playoffs. Thursday, while in Nashville, he got a sneak preview – well sort of.

Bowyer, one of 16 drivers currently in the Monster Energy NASCAR Cup Series Playoffs, made a pit stop in Music City, U.S.A., to sing the tune of NASCAR’s Most Competitive track while stopping at the Johnny Cash Museum, the Tennessee Titans practice facility for some racing action with players, as well as the famous Martin’s Bar-B-Que Joint for lunch.

The two-time Talladega Superspeedway winner (fall events in 2010, 2011) currently sits 11th in the championship race, seven points above the cutline after one playoff event. Talladega’s 1000Bulbs.com 500 in just over three weeks will serve as the pivotal second race in the Round of 12 (the fifth race of the final 10 playoff races).

“Today was really cool, and when you think about it, it all sorta relates to us in the playoffs and Talladega as well,” said Bowyer. “Johnny Cash is one of my all-time heroes – the man in black, tough and rugged who went through some tough times before ultimately having incredible success in the country music industry. My career has seen some peaks and many valleys, but right now, I feel like we have the team (No. 14 Stewart-Haas Racing) that can get it done and be at the top of the mountain. I am so proud of what we have accomplished, not just our #14 team but SHR as a whole with all four teams making the playoffs.

“When you look at our #14 team, we are like a Titan.  We have great leadership qualities and have shown great strength, making us a power and threat each and every week. That is what it will take to win again at Talladega, and ultimately a championship. We will have to be at our absolute best to win ‘Dega. I love Talladega. Love the racing on the track, love the social atmosphere it presents for the fans – it is unlike any place we go. On the track, it will be intense as hell, but that is what makes it different. It will be an incredible show for fans to be there and watch.”

Bowyer’s first stop was at the Cash Museum. The iconic Cash was one of the best-selling music artists of all time, and did it his way. Bowyer’s admiration for Cash is deep. In fact, his three-year-old son is named “Cash.”

“One of the neatest things I have ever done,” said Bowyer of his tour. “I thought I knew everything about Johnny Cash but I found out today there are so many other incredible things about him that I wasn’t aware of. He was an incredible song writer, and some of the memorabilia was something to see. What an experience. Needless to say I love Johnny Cash. Heck, my son’s name is Cash!”

During his stop with the Titans, Bowyer, from Emporia, KS, met with first-year Head Coach Mike Vrabel, who has vast knowledge to win under pressure, especially in the playoffs. The former linebacker (57 career sacks in 14 years) won three Super Bowls as a player for the New England Patriots and legendary head coach Bill Belichick. He finished the last two years of his playing career (2009-2010) for Bowyer’s beloved Kansas City Chiefs. Vrabel gave Bowyer a Titans jersey with his name on the back while Bowyer presented Vrabel, as well as team General Manager Jon Robinson, a Stewart-Haas Racing pit crew shirt.

“I met a lot of really nice people with the Titans who took time to talk with me and learn about our sport,” said Bowyer. “Coach Vrabel is a guy who knows first-hand what takes to win a championship. There are many parallels with our two sports. He knows every person on a team has to do their job and execute. The physical part of it is a given, but the mental part of it is just as important. You have to be mentally up for the challenge, and that is something that is of the utmost importance as we vie for a championship and a win at Talladega.

“More than any other place we go, you have to be focused at Talladega because its 500 miles of mind games. It’s all about making good, quick, decisions by all of the team – the guys in the pits, my spotter and me in the race car. If we can do that, we will be in a great position to get another Talladega win, and hopefully advance in the NASCAR Playoffs.”

While with the Titans, the likable Bowyer had some fun with some of the players, catching up on the practice field with former Alabama Crimson Tide linebacker Rashaan Evans and kicker Ryan Succop, who hails from Hickory, NC, home to many NASCAR drivers over the years. Center Ben Jones (who played high school ball in Centreville, AL) before attending Georgia, then took on Bowyer in a remote control truck race on the field. Jones is a NASCAR fan who says he has been to numerous races at the Talladega.

Visit www.talladegasuperspeedway.com or call 855-518-RACE (7223) for all ticket information to experience the highly-anticipated playoff weekend, which also features the Talladega 250 for the NASCAR Camping World Truck Series on Saturday, Oct. 13.