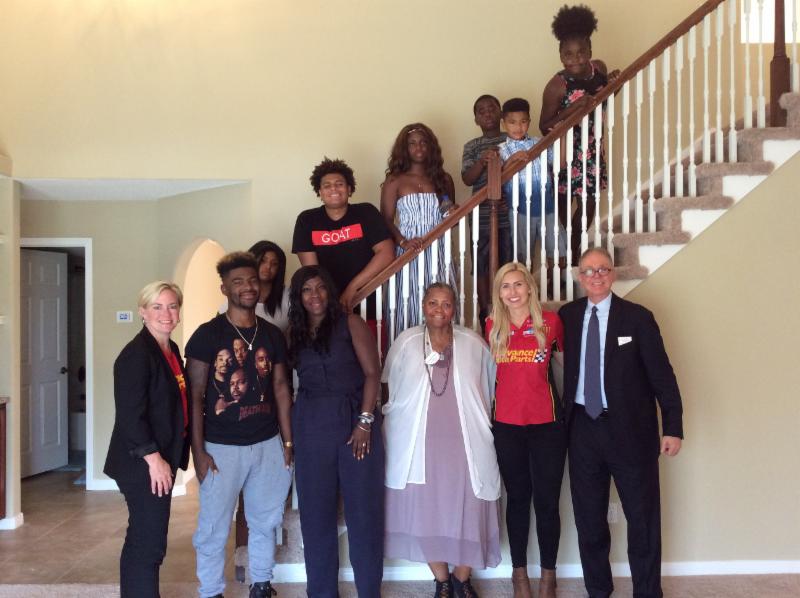 Funny Car standout and championship frontrunner Courtney Force will be featured on the Lifetime television series, ‘Live Life Forward’, a show dedicated to spreading awareness about how deeply lives can be changed through community involvement. Force will be on the season two premiere episode, ‘A Home Built for a Hero’ on Tuesday, Sept. 18th at 7:30 a.m.
Force had the opportunity, through Advance Auto Parts and their partnership with Building Homes for Heroes, to travel to Navarre, Florida to participate in gifting a home to the family of Mark De Alencar, a Gold Star U.S. Army Staff Sergeant who last year gave everything in the line of duty. The episode will focus on honoring Mark De Alencar and recognizing his service in the U.S. Army by helping to create a fresh start for the family he left behind.
“It was an honor for me to be there with Advance Auto Parts supporting Building Home for Heroes. It was incredible to be part of that event, for the De Alencar family. I was so honored to be a part of that moment,” Force said. “It was really great to see the team aspect with the entire community coming together. Everyone that had a hand in this, it shows how we can come together and really pull something amazing off for the ones who really deserve it and for the ones who are really sacrificing for our country and allow us to be here in the land of the free because of the brave.”
Since 2006, Building Homes for Heroes® has been strongly committed to rebuilding lives and supporting the brave men and women who were injured while serving the country during the time of the wars in Iraq or Afghanistan. The organization builds or modifies homes, and gifts them, mortgage-free, to veterans and their families in an effort to honor and support the men and women who have loyally and courageously served the country. To find out more about Building Homes for Heroes visit www.buildinghomesforheroes.org.
JFR PR