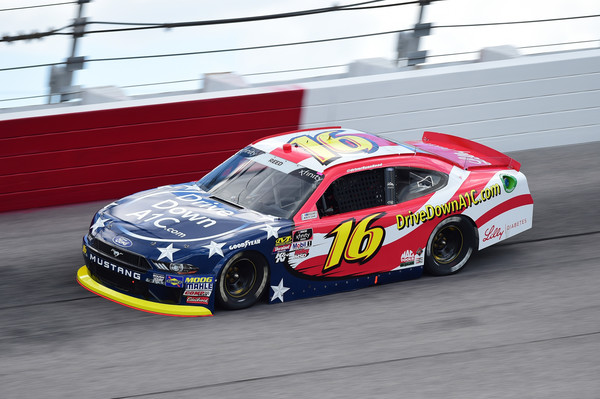 Ryan Reed took on the historic track of Darlington Raceway for NASCAR’s Throwback weekend in his No. 16 Drive Down A1C Lilly Diabetes Ford Fusion Saturday afternoon.  Reed started the race 14th and despite dealing with a tight-handling condition was able to maintain his ground to cross the finish line 13th.

“Overall, it was just a tough weekend here in Darlington,” said Reed.  “We knew this was going to be a tough one for us on the schedule.  I feel like we’ve always had this place kind of circled as a place we need to get better at and we came here and tried a lot of things.  Ultimately, finishing 13th, it’s not anything that we’re going to walk away from here really super-proud of, but, at the same time, it didn’t cost us any big points or anything like that.  So it was kind of an uneventful weekend.  We stayed out of trouble and salvaged what we could and now we’re ready to go to Indy and try to get Lilly Diabetes a win in their hometown.”

Reed started the race 14th and maintained his track position over the course of the first 45-lap stage as the handling shifted to tight and grip went away.  After a pit stop for four tires, fuel and a wedge adjustment, Reed lined up 12th to take the green for stage two.

The changes from the previous stop were not enough and Reed continued to lose rear grip.  By the time stage two had concluded Reed had fallen back to 17th.  Another swing at adjustments ensued at the stage break and Reed lined up 15th for the final segment.

Rear grip continued to be a struggle for the No. 16, but despite that Reed was able to cross the finish line 13th in his No. 16 Ford.