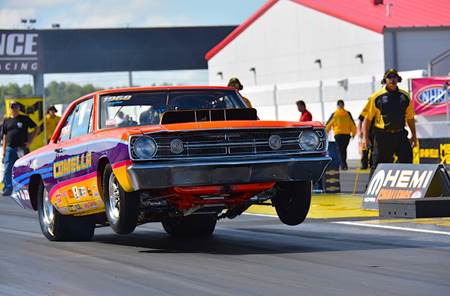 A record-tying 30 drivers hailing from 17 states will gather at Lucas Oil Raceway at Indianapolis on August 30-31 to fight it out in the NHRA Dodge HEMI® Challenge, held during the historic NHRA U.S. Nationals, August 29 – September 3. The victor’s Wally trophy will have even more of a “golden” luster this year, as 2018 also marks the 50th anniversary celebration of the Mopar-powered 1968 Dodge Dart and Plymouth Barracuda Super Stock cars that compete in the fan-favorite event.

The current field of entries, matching the largest in the event’s 18-year history, will duke it out for the iconic 42.6-lb NHRA Dodge HEMI Challenge trophy, created as a callout to the 426 HEMI engine, and the $15,000 winner’s purse. Three returning Indy HEMI Challenge champions will be among those vying for the win in the first event with Dodge as title sponsor, including two-time and defending champion James Daniels in his Dodge Dart, 2015 winner and Plymouth ‘Cuda pilot Lloyd Wofford and inaugural 2001 HEMI Challenge race winner Bucky Hess.

Also joining the 22-year-old Daniels in the mix for the 2018 title will be last year’s runner-up and New Brunswick, Canada, native Wendell Howes, one of three Canadian competitors who will run at Indy. Stephen Hebert, runner-up in 2016, will lead a crew of five drivers with Louisiana roots, the largest turnout from a single state, followed by three representatives each from Pennsylvania and Ohio. The “Fish” cars will have numbers on their side: 21 Plymouth ‘Cudas will square off with nine Dodge Dart entries.

All NHRA Dodge HEMI Challenge competitors will be parked together in the Lucas Oil Raceway pit area. All drivers finishing in the top 16 will receive cash rewards. A parade of HEMI Challenge cars will take place Friday morning, August 31, before eliminations commence, with the final round to crown the 2018 champion scheduled for prime time on Friday night, just prior to NHRA Nitro qualifying.

The NHRA Dodge HEMI Challenge showcases Super Stock/A-HEMI (SS/AH) NHRA Sportsman class competitors battling on the quarter-mile in 1968 Mopar “package” cars, powered by the legendary 426 HEMI engine, nicknamed the “Elephant” engine for its size and power. The Dodge Dart and Plymouth Barracuda Super Stockers are one of the earliest and most iconic iterations of the purpose-built vehicles created at the factory. The cars feature distinct race “packages” and are for use solely on the drag strip. The Dodge Dart and Plymouth Barracudas are precursors to the modern-day package car — the Mopar Dodge Challenger Drag Pak.

Don Schumacher Racing (DSR) Mopar Dodge Challenger Drag Pak drivers Mark Pawuk, runner-up at Norwalk, and Leah Pritchett, who will again pull double-duty in Top Fuel and Factory Stock, are seeking their first class wins. Joe Welch, owner of back-to-back Factory Stock wins, will go for three in a row at Indy. Pro Stock champion Allen Johnson raced to the quarterfinals at Norwalk, his best outing since his transition to Factory Stock, and will look to advance deeper in the field. Geoff Turk made history in his Drag Pak earlier this year by becoming the first driver to break into the seven-second range in a Factory Stock car and will also return to action at the U.S. Nationals.

Heading into the U.S. Nationals, the final event prior to the start of the six-race NHRA Countdown the Championship, all six of the DSR Mopar Dodge//SRT teams in NHRA Funny Car and Top Fuel are locked into top-10 playoff berths, with only their final positions left to be determined.

Visitors to the Mopar Dodge//SRT fan display at the U.S. Nationals can try their luck at the “Drag Strip Showdown,” a head-to-head competition in Dodge Challenger SRT Demon simulators. The contest runs through November 11, and will send the top four drivers with the best race times on a trip to the Dodge//SRT Bondurant Drag Racing School near Phoenix. Winners will be paired with either Mopar Dodge NHRA racers Leah Pritchett or Matt Hagan for a final competition that will take place at Bondurant in the actual 840-horsepower Dodge Challenger SRT Demon vehicle –the most powerful muscle car ever.

The “Drag Strip Showdown” includes stops at Dodge-sponsored NHRA races throughout the country, as well as at the Mopar exhibit at the 2018 Specialty Equipment Market Association (SEMA) show in Las Vegas, set for October 30-November 2. Two additional winners will be randomly selected by entering the “Drag Strip Showdown” online sweepstakes component of the promotion at Dodge Garage, which also features a current leaderboard of the top-four drivers in the contest.

For more than 100 years, the Dodge brand has carried on the spirit of brothers John and Horace Dodge, who founded the brand in 1914. Their influence continues today. New for 2019, the Dodge Challenger SRT Hellcat Redeye is possessed by the Demon. Its 797-horsepower supercharged HEMI® high-output engine makes it the most powerful, quickest and fastest muscle car reaching 0-60 miles per hour (mph) in 3.4 seconds and the fastest GT production car with a ¼-mile elapsed time (ET) of 10.8 seconds at 131 mph. It also reaches a new top speed of 203 mph. Joining the Challenger SRT Hellcat Redeye is the 2019 Dodge Challenger SRT Hellcat with its more powerful 717-horsepower engine, the Challenger R/T Scat Pack Widebody, which features fender flares from the SRT Hellcat Widebody and adds 3.5 inches of width to Scat Pack’s footprint, as well as and the new Challenger R/T Scat Pack 1320. Infused with exclusive drag strip technology from the iconic Dodge Challenger SRT Demon, the Challenger R/T Scat Pack 1320 is a drag-oriented, street-legal muscle car and a blank canvas for the serious grassroots drag racer.  The 2019 Dodge Durango SRT, America’s fastest, most powerful and most capable three-row SUV with a best-in-class tow rating of 8,700 lbs. fills out the brands’ performance lineup. These visceral performance models join a 2019 brand lineup that includes the Durango, Grand Caravan, Journey, Charger and Challenger — a showroom that offers performance at every price point.