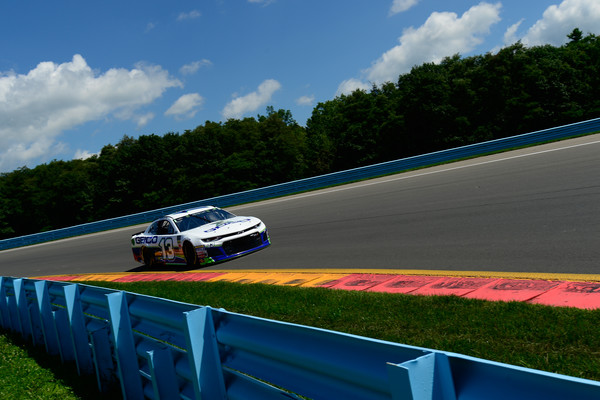 As the Monster Energy NASCAR Cup Series descended upon the scenic Finger Lakes region of New York, Germain Racing was anxious to get on-track. Watkins Glen served as the second road-course event of the season, following up the Sonoma race in June, where Ty Dillon and the GEICO team experienced success before a transmission issue dashed the team’s hopes.
Dillon finished up Friday’s opening practice in the 31st position. The moment the GEICO Camaro returned to the garage, crew chief, Matt Borland, ordered the necessary changes and readied the group for the upcoming session. Borland’s changes paid dividends and Dillon improved by eight positions and sat 23rd on the board when the final practice session drew to a close.
When race day rolled around, Dillon and company would be dealt a challenging setback after loose bolts in a brake rotor forced the team to make, what NASCAR deems, unapproved adjustments. Consequently, Dillon and the GEICO Camaro ZL1 were forced to start the 90-lap event

from the rear of the field when the green flag set the field underway on Sunday. Unfazed by the circumstances, the young gun quickly began collecting positions in bulk, picking up 14 spots and landing in 23rd place by the close of lap 10.
As the race wore on, Dillon began battling a loose condition that plagued him through the esses and he also struggled to get the frontend to turn. The GEICO crew used each pit stop to make the requested changes and things seemed to improve. On lap 37, Dillon reported, “The pressure changes helped the overall grip.” Later, on lap 54, when the fourth caution of the day came out, he shared, “That was better. It was a step in the right direction.”
Unfortunately, Dillon would once again find himself at the rear of the field after NASCAR charged him with driving through too many pit boxes as he entered pit road during the lap 54 caution. He calmly responded on the team’s radio frequency, “I will get it back.” True to his word, Dillon began picking off cars one-by-one until he had the No. 13 GEICO Camaro ZL1 back in the top-25. He continued making up ground and, when the checkered flag brought the action to a halt, a resilient Dillon crossed the finish line in the 23rd position and posted his second consecutive top-25 result.
“Making the trip up to The Glen is always interesting. We only come to this track once a year, and we came this year with a new crew chief, a new body style and a new inspection system to adapt to,” Dillon said following the race. “We had decent practice sessions with our GEICO Camaro ZL1, and I felt good going into the race today because I like road-course racing. We just struggled through the esses all weekend. I was loose all the way up the hill at the start of the race. We improved it a bit with air pressure adjustments, but then the frontend was struggling to turn and we had to address that with changes, too. We made the adjustments that we needed to throughout the day to make it to the end of the race. I wish we could have cracked into the top 20, but this team worked hard. We’ll have all of these notes to build on next year.”
Germain Racing will now return to the Irish Hills of Michigan for race number 23 of the Monster Energy NASCAR Cup Series season.
Ty Dillon and the No. 13 GEICO Camaro ZL1 will hit the track at Michigan International Speedway for the weekend’s opening practice session on Friday, August 10th, at 12:05 PM (ET). Qualifying will follow at 5:05 PM (ET).
The Consumers Energy 400 Monster Energy NASCAR Cup Series race is on Sunday, August 12th, and it will be televised live on NBCSN beginning at 2:30 PM (ET). The Motor Racing Network (MRN) will carry the live radio broadcast, along with SiriusXM NASCAR Radio, channel 90.
PMI PR/Photo Credit Robert Laberge/Getty Images
Post Views: 229

A Bittersweet Second for Harvick at Bristol