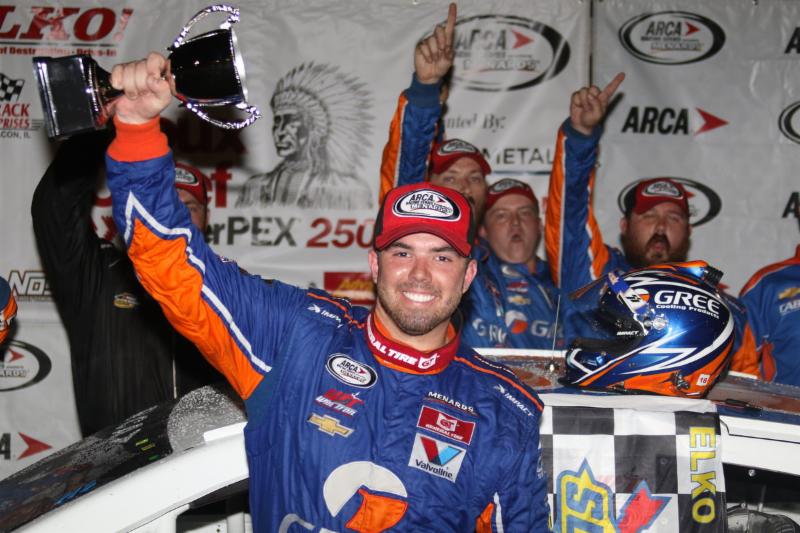 It ended up being a “GREEt” Saturday night for Gus Dean and the Win-Tron Racing team at Elko (Minn.) Speedway.
A bold call from crew chief Jamie Jones had many thinking it would hurt Dean’s chances for a strong finish, let alone a victory in the Sioux Chief PowerPEX 250, but a little luck and a hard-charging driver withstood a three-lap shootout to score their first ARCA Racing Series presented by Menards victory of the season.
Practicing well on Saturday afternoon, Dean and Jones knew they had a fast No. 32 GREE Cooling Products | Baker Distributing Chevrolet to contend for the win – but had to overcome a seventh-place qualifying effort to do so.
In typical Gus Dean fashion, the Bluffton, S.C. native wasted no time making moves and moving forward.
By Lap 10, Dean had negotiated himself to fifth – but during the event’s second caution, Jones elected to keep his driver out while the competition around him chose to pit.
The strategy shot the 23-year-old Dean to the lead but was shortly after the restart, he was quickly eaten by his competition on fresher tires.
Trying to hang onto to his race car, Dean found himself two laps down and outside the top-10.  A Turn 2 spin at Lap 160 didn’t help matters either.
But Dean and Jones’s “never give up” attitude paid off.
An array of cautions during the second half allowed Dean to become the beneficiary of two “free passes” at Lap 210 and Lap 225 allowing the No. 32 GREE Cooling Products | Baker Distributing Chevrolet to get back on the lead lap and contend for a good finish.
Instead of settling for a top-10 performance, Dean with fresh tires muscled his way through the lead lap cars and found himself back on the tails of the leaders 10 laps later.
By Lap 237, Dean was battling Chase Purdy for the race lead, clearing the No. 8 Toyota and hoping to set sail for his second ARCA victory.
However, Purdy encountered a problem a few laps later putting the field under a red flag for 28 minutes.
Electing to take the bottom lane for the restart, Dean held off an aggressive charge from then second-place competitor Joe Graf Jr.