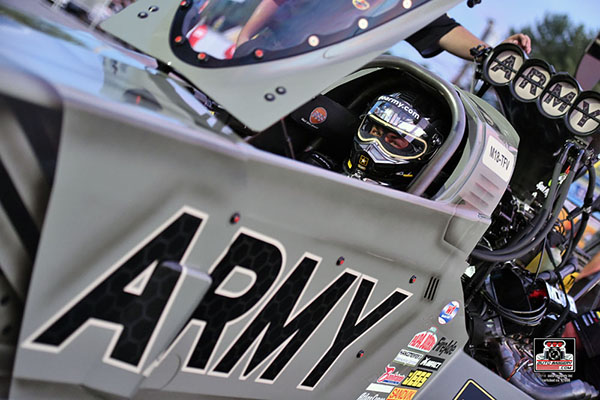 Schumacher and his U.S. Army Dragster team for Don Schumacher Racing (DSR) entered the weekend hoping to become the first team to score three Top Fuel victories at New England Dragway. Warm conditions made Friday’s opening session challenging for most of the Top Fuel field including “The Sarge”, who hazed his rear tires just after the 330-foot mark resulting in a pass of 5.193 seconds at 132.71 mph. The U.S. Army Racing team rebounded in a big way making a statement run of 3.744 seconds at 330.31 mph in the second session. The eight-time Top Fuel world champion momentarily held the top spot before Pritchett edged him by two-thousandths of a second.

“What a great team effort for DSR today to claim the top two spots,” said Schumacher. “We’re working well together and when everyone puts their heads together the results start coming. I know Antron will be right up there with us tomorrow. I’m really happy with how this U.S. Army car is running. Mike Neff and Phil Shuler are doing a great job. We actually went faster than we were shooting for. Obviously, there was just a little bit more out there. Leah found it and took the number one spot. Tomorrow we’ll have good conditions, but most likely not as good as we had tonight. It’s about consistency. We’ve done well in qualifying this year, but not good enough on Sundays. We’re hoping to change that this weekend.”

Brown and the Matco Tools/U.S. Army Dragster for DSR have reached the finals in each of the last two NHRA New England Nationals and after a pair of difficult runs Friday, the three-time Top Fuel world champion will have to flex that championship form Saturday to improve his chances on Sunday. The 2016 NHRA New England Nationals winner made almost identical passes in significantly different conditions Friday. He lost traction both runs just before halftrack and coasted to the line. In the opening session, he posted a lap of 6.500 seconds at 104.50 mph and followed that with a run of 6.580 seconds at 103.35 mph.

“That wasn’t quite what we had in mind for today, but this Matco Tools/U.S. Army team will come back tomorrow fighting” said Brown. “We looked at the data from that first run and made some changes hoping to put a lap in the 3.70s. We know we have a lot of horsepower, but we just have to adapt all of it to the track. This team led by Mark (Oswald) and Brad (Mason) will work hard tonight to come up with a plan for tomorrow.”

Pritchett and her Mopar/U.S. Army Dragster for DSR returned to New Hampshire looking to earn a second straight No. 1 qualifier award at New England Dragway lost a cylinder during Friday’s first qualifying run and posted a lap of 4.194 seconds at 203.52 mph. In the night session, she watched Schumacher’s run and then followed her teammate in the left lane by blazing to the top spot with her pass of 3.742 seconds at 324.51 mph.

“The success we feel as a team right now is something we’ve been looking forward to,” said Pritchett. “That thing was sucking to the inside, it was starting to spin at the top end and I stuck with it as long as possible. We were a little bit shy footage-wise to the finish line. That could’ve been a couple thou quicker, but we’ll take it. Of course, there’s more qualifying tomorrow, but it feels good. We’re finally able to put our maximum on the track and today we showed it. Tomorrow is going to be important for Sunday, today was about position, which is how from a strategy standpoint you have to race.”