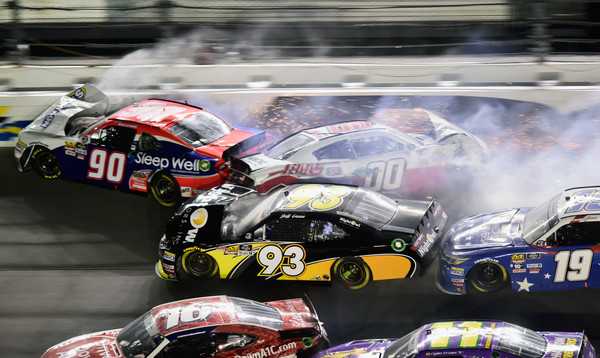 ● Custer powered the Haas Automation Ford to the lead for the first eight laps.

● On lap 10, he was shuffled to the middle of the pack, but quickly re-entered the top-10.

● During the opening laps, Custer wedged his way into the third position but was left with no help from behind when a car pushed him to the outside lane.

●He fell to 26th place and drove his way back to the top-10. On the last lap, he avoided a wreck and fell to 16th place.

● He pitted for four tires, fuel, wedge and chassis adjustments when the stage concluded.

● On lap 82, Custer was struck on the right side during a multi-car accident. The red flag was brought out with Custer in the 18th position.

● When racing resumed, he piloted the Haas Automation Ford into the top-five, but was shuffled to the middle of the field and clipped by another car on lap 97. The damage on the No. 00 was unrepairable, ultimately ending Custer’s day.

● Custer led one time for a total of eight laps.

● Kyle Larson won the Coca-Cola Firecracker 250 to score his 11th career Xfinity Series victory, third of the season and first at Daytona. His margin of victory over second-place Elliot Sadler was .005 of a second.

“I felt like our Haas Automation Mustang was really strong and fast, but it didn’t handle the best. We got it better throughout the race and at the end, I felt like we were pretty good and could compete for a win or a top-five. Everybody got crazy there and I think we ran out of room. I think there was nothing we could really do about it, so we’ll move on to the next one.”

The next event on the NASCAR Xfinity Series schedule is the Alsco 300 on Friday, July 13 at Kentucky Speedway in Sparta. The race starts at 8:00 p.m. EDT with live coverage provided by NBCSN.

Josh Berry to Sub for Michael Annett at Loudon in JRM’s No. 1 Entry