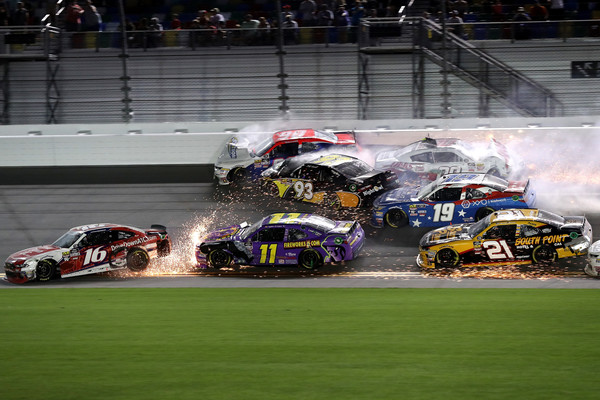 Ryan Reed, a two-time Daytona Champion, put forth a valiant effort Friday evening.  Reed started in the back of the field and worked his way forward through the pack multiple times throughout the 100-lap event before being collected three laps shy of the checkered flag.  The damage was too severe to finish and Reed was credited with a 26th-place finish in his No. 16 Drive Down A1C Lilly Diabetes Ford Fusion.

“They were wrecking going through the tri-oval up top and I got hooked in the left-rear,” said Reed.  “I don’t know if I came down some on the No. 11 or not, it was just chaos.  It’s just Daytona.  You’re just scrapping and hoping for the best there.  We’ve been on the right side of it a few times and tonight we weren’t.  We knew we were fast.  It was a typical deal and we got a shot, but we didn’t quite get to the end of that thing.

“We could get to the front.  Once you get into the top 10 it’s hard to move around, but we could fly up to the top 10 every time, so that was never a worry of mine.  It’s disappointing.  We went through the grass and that ripped the nose off, so we were done after that.  It’s just one of those deals.”

Reed started from the tail end of the field after a penalty for unapproved adjustments.  Reed wasted no time displaying his restrictor plate racing skills and drafted his way into the top 10 just nine laps into the race, ultimately closing out the Stage 11th.  With a tight handling Ford, Reed took to pit road for multiple chassis adjustments at the end of Stage 1.

Stage 2 went caution free and at the conclusion, Reed pitted for a two-tire stop, gaining eight positions to start the final Stage fourth.  On lap 72 Reed got loose off of turn four and some light contact from behind sent him spinning.  After three pit stops for body repairs Reed was ready to go back racing.

Reed restarted 33rd, but a few laps later had drafted his way into the top 15.  A multi-car wreck unfolded on lap 81 and Reed once again sustained some damage.  This time around just one pit stop was needed to make the necessary adjustments.

On lap 87 Reed took the green flag from the 18th position and a few laps later was inside the top 10.  With three laps to go Reed was collected in a multi-car accident on the track.  The damage was too severe to continue, resulting in a 26th-place finish.