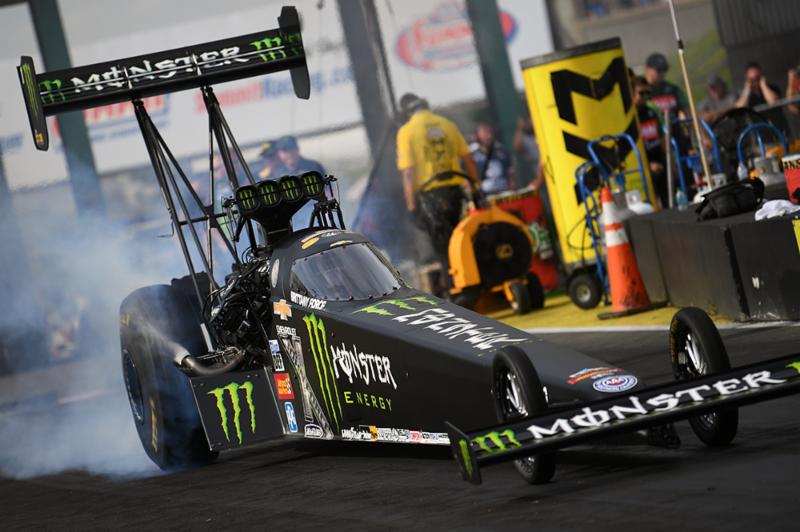 Heading into the NHRA New England Nationals at New England Dragway, defending world champion Brittany Force and her Monster Energy team are teed up for a strong start to the second half of the season.
After 12 races on the NHRA Mello Yello Drag Racing Series season, Force has a win and a No. 1 qualifier under her belt. Entering the New England Nationals last season, Force was chasing her first win of the season. She found it in New Hampshire, nearly doubling up with sister Courtney Force.
“I’m excited to be heading back to Epping and to be getting back in my race car after a weekend off. We’ve had some success at New England Dragway over the years and won there last season. Our Monster Energy team is looking for another win this season and would love to repeat our success from last year.”
Force’s 2018 season undoubtedly got off to a less than desirable start with a wreck in the season opening event, but now, in the middle of the pack in the NHRA Mello Yello points standings, that’s all in the past. Force has qualified inside the top five nine out of 12 times and after testing in Norwalk, Ohio following the Summit Racing Equipment NHRA Nationals, Force knows her team is ready to turn the consistent qualifying runs into round wins.
“Our 2018 season definitely got off to a rough start after wrecking at the opening race of the season. While I recovered for two weeks between races, my Monster Energy team went to work with our (Force American Made) shop in Indy to build a new car,” Force said. “Our teams take the entire off season for a project like that, but these boys got the job done just four races later and, when we debuted our new car in Houston, we took it all the way to the winners circle.
“We are halfway through the season now and in the No. 8 spot but we are determined to step up our game and keep moving up that ladder,” continued Force. “We qualify well but have been struggling on race day. After some testing in Norwalk this team is feeling confident going into the rest of the season and ready to bring home another win.”
Force and her Top Fuel dragster will be racing the full Monster Energy colors at the Epping, N.H. event after a four race stint of matching her sister, Courtney Force, with Advance Auto Parts and Monster Energy on her dragster.
The NHRA New England Nationals begin with two qualifying sessions on Friday at 5 p.m. and 7:30 p.m. and an additional two rounds of qualifying on Saturday at 2 p.m. and 4:30 p.m. Eliminations are slated to begin Sunday at 11 a.m. at New England Dragway.
JFR PR/Photo Credit Auto Imagery
Post Views: 217