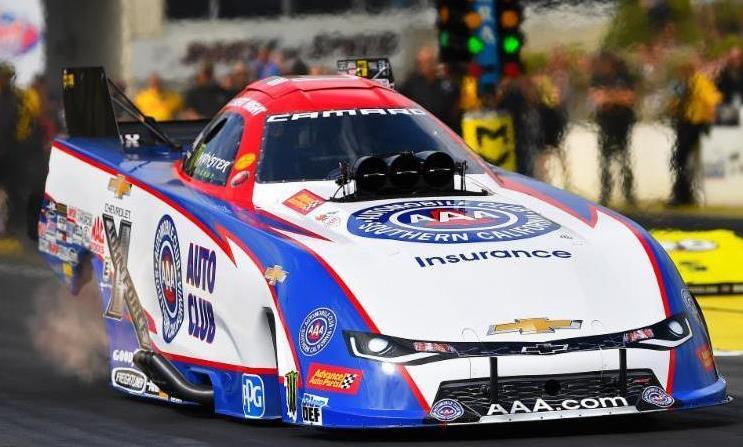 For many years Robert Hight used his hand eye coordination skills to demolish trapshooting targets. He was so proficient that Olympic aspirations were not out of the question but Hight traded in his shotgun for something with a little more kick over two decades ago. Now he trains his eyes on the flicker of yellow from the starting line Christmas Tree and has been demolishing track speed and elapsed time records behind the wheel of his Auto Club of Southern California Chevrolet Camaro Funny Car.
Now with two NHRA Mello Yello Funny Car world championships under his belt Hight has his sights set on a dominant start to four races in a row during the month of June starting with the JEGS Route 66 NHRA Nationals outside of Chicago. The veteran driver is off to a fast start in 2018 and success is right around the corner for the 41-time Funny Car winner.
“I am looking forward to getting to Chicago. We learned a lot in Topeka with that runner-up finish,” said Hight. “I am ready to get four in a row going. I like the month of June when we are racing every single weekend. Chicago is on my bucket list for race tracks where I want to get a win. I haven’t been able to check off that box yet. I feel like our Auto Club Camaro is good enough and I have a lot of confidence in my driving.”
Two weeks ago in Topeka Hight turned in a masterful job of driving racing from the No. 14 qualifier position. In the first round he out-pedaled two-time world champion Cruz Pedregon to get the win and then the next two rounds his Auto Club Camaro overpowered his opponents. In the final against teammate and Funny Car points leader Courtney Force Hight spun the tires down track and came up just a few feet short of his first win in 2018.
For Hight who has three runner-up finishes so far this season power and performance have not been a problem. Hight and his Jimmy Prock tuned Auto Club Camaro is consistently one of the quickest and fastest race cars on the property week in and week out. That’s kind of success gives the former crewman turned racer a lot of confidence.
“We have been to three finals in eight races. We haven’t gotten a win yet but we have a lot of new parts on this race car and we have a new engine combination,” added Hight. “We are learning now and it shows a lot of potential. The new track prep makes it a little tougher for a car like us because we are out there trying to run low ET every run. We are going to adapt and we will be right there in the mix throughout the summer and into the Countdown.”
This will be Hight’s fourteenth attempt at a win at the stadium style track outside of Chicago. Big crowds have turned out every race and in 2010 and 2006 they saw Hight race to runner-up finishes. Last year he was the No. 1 qualifier, a feat he has record three times at Route 66 Raceway.
Qualifying for the JEGS Route 66 NHRA Nationals will begin on Friday at 6 p.m. and 8:30 p.m. and continue Saturday at 3:30 p.m. and 6 p.m. Final eliminations will begin at 11 a.m. on Sunday.
JFR PR