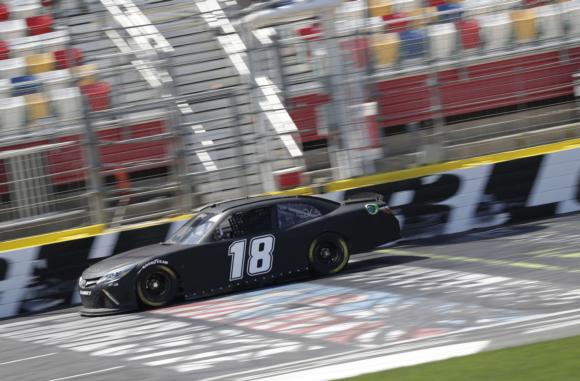 The Alsco 300 – the penultimate event of the May 18-27 10 Days of NASCAR Thunder – gives Xfinity Series drivers their only chance to win on Charlotte’s 1.5-mile oval. The Sept. 29 Drive for the Cure 300 presented by Blue Cross Blue Shield of North Carolina will be contested on the speedway’s revolutionary, 2.28-mile ROVAL road course oval configuration.

“I’m having the time of my life,” Sadler said. “Look how we’re running. We’re running good each and every week. Eighty percent of the races I’ve started for JR Motorsports, we’ve led the points. That says a lot for our team. I’ve got a great group of guys. (Crew chief) Kevin Meendering is my hero. He’s brought a lot of life to my career as a race car driver.”

Prior to the test, Allgaier said his focus had already shifted to the Alsco 300.

“This race just means a lot,” Allgaier added. “All of us want to win here. We want to win at home. Furthermore, this is a very, very tough mile-and-a-half. … The other part of it is that this is the only oval race we have at Charlotte now, so it puts a lot more pressure on us if we want to win at Charlotte (on the oval configuration) to get it done in the spring race.”

Daniel Hemric, who grew up in nearby Kannapolis, North Carolina, will chase his first Xfinity Series victory at his home track. Hemric grew up racing Legend Cars on Charlotte’s frontstretch quarter-mile – where he won two Bojangles’ Summer Shootout Pro Division championships as well as the 2010 Legends Million at the speedway.

“We come here with a test plan as an organization,” Hemric said of his Richard Childress Racing team. “It’s really cool to have a couple of full-time cars and have the option to put one team down one path and one down the other. By doing that, it allows us to treat it as if we get multiple tests. So far, we’ve been able to acquire some good data from all of the drivers’ overlays, parts and pieces to our race cars that we think could help us in other places.”

“For me, I’m just here for the fun. I get to drive race cars on a Monday,” Bell said. “That’s pretty cool. It’s good to hopefully be able to develop a setup that you can unload with and have the confidence to go out there on Lap 1 and hold your foot down a little longer. Any time you get to test before a race it gives me confidence, but there are 20 other cars out there that have that same advantage.”

Kids get in FREE to the May 26 Alsco 300 and gain admission to the May 27 Coca-Cola 600 – and the Eli Young Band pre-race concert – for just $10. Tickets, camping and upgrades are available by visiting charlottemotorspeedway.com/tickets or calling 1-800-455-FANS (3267).