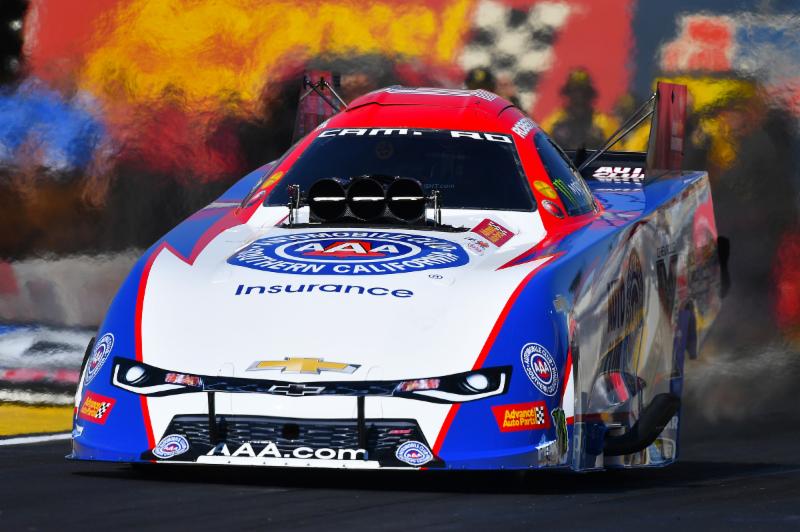 There are a handful of drivers who shake their heads when they see the four-wide format nearing on the NHRA Mello Yello Drag Racing Series schedule. The unique format of four, 10,000 horsepower Funny Cars getting staged and launching in concert can be a lot to take in but, for reigning Mello Yello Funny Car world champion Robert Hight the original modern-day NGK NHRA Four-Wide Nationals is a race he looks forward to every season.
Hight has two wins at four-wide races at zMax Dragway grabbing the trophy in 2012 and 2014. He has only missed advancing to the second quad once (2016) and he holds the zMax Dragway track speed record at 333.91 mph.
“I look at the four-wide races as a challenge,” said Hight, a 41-time Funny Car winner. “I don’t do anything differently. You just need to keep your focus and do your job. This Auto Club Camaro has won a lot of races at zMax Dragway and that track is amazing. Bruton Smith and his staff did an amazing job when they built it and they did a great job at Las Vegas too.”
Hight’s five wins at zMax Dragway makes this track, along with Las Vegas, the facility where the two-time world champion has the most wins.
“I don’t know what it is about Charlotte we have had a lot of success here both at the four-wide races and to start the Countdown,” said Hight. “I do think this Four-Wide Nationals will be different because we got a warm-up race in Las Vegas. I know I will be more comfortable which gives me even more confidence. We had an awesome race car last weekend in Houston and just needed one more win light.”
On race day in Houston, Hight had the hottest race car on the property setting the event low elapsed time in the first round of eliminations and then running the quickest elapsed time of the second round and the semifinals. In the final round his Auto Club Camaro made another stout run but was barely outrun at the finish line by J.R. Todd who picked up his second consecutive win of the season.
“When our Auto Club Camaro is running like we know it can it is tough to beat,” added Hight. “There is nothing better than being in that seat when you are on a nice smooth, quick run. The track was a little tricky last weekend and (crew chief) Jimmy (Prock) and the crew did an amazing job. With good conditions in Charlotte I think we can run some really great numbers. This is also an event where having a team of Funny Cars helps since we only get one run on each lane in qualifying.”
In the traditional side-by-side national event teams get two runs in each lane. During the four-wide events each team gets one run in each lane to make up the four qualifying sessions. Hight’s team will have the benefit of seeing and sharing data between the other two John Force Racine Funny Cars campaigned by team owner John Force and teammate Courtney Force.
With two runner-up finishes this season, including last weekend, Hight is focused on building momentum headed into the summer and beyond.
“Jimmy and I talked before Houston that we were going to really start our season with the next three races. We got to the final round in Houston and we expect great things this weekend in Charlotte. It is still early but we made a move in the points and I feel very confident,” summed up Hight.
Qualifying for the 9th annual NGK NHRA Four-Wide Nationals will begin Friday with qualifying sessions at 4 p.m. and 6 p.m. Saturday the nitro categories will return for two more qualifying sessions at 2 p.m. and 4 p.m. and final eliminations will begin on Sunday at noon.
JFR PR

Terry McMillen Has More Goals On Tap Leaving US Nationals