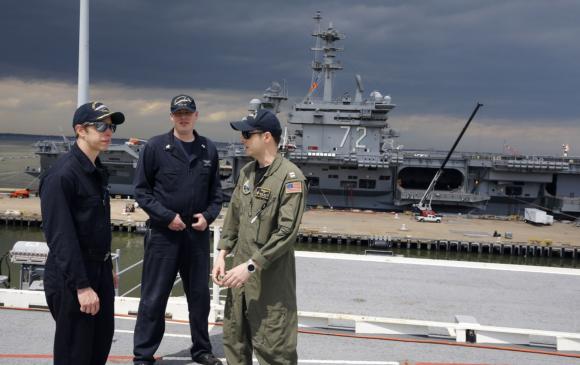 Keselowski, the driver of the No. 2 Miller Lite Ford Fusion, toured the expansive USS Gerald R. Ford – the Navy’s newest and most advanced aircraft carrier – which is 1,100 feet long and is home to 5,000 sailors. Additionally, Keselowski, dressed in a Navy uniform, took a familiarity flight in a helicopter over Naval Station Norfolk with Helicopter C Combat Squadron 9 and met with commanding officers and the crew who launch aircraft from the carrier. The 2012 Cup Series champion and founder of Brad Keselowski’s Checkered Flag Foundation spoke with numerous sailors and took in the sights and sounds of his first trip to the remarkable aircraft carrier.

“This is a tremendous opportunity to see our nation’s heroes on the active duty side,” Keselowski said. “It’s a great chance to engage. Sometimes we rely on people to come to us, and this is a great chance to go to the men and women who are serving and to see their workplace. Like anything else, it always helps to appreciate something you’ve seen in person, and I have a deep appreciation for the entire United States military. Seeing a vessel and a vehicle like this and the team it takes to operate the USS Gerald R. Ford, it’s really an amazing experience.

“I’m a big supporter of the men and women who put their lives on the line for our country. … I know that from my racing operations, it takes a team. I joke with people about doing 10 percent of the work and getting 90 percent of the glory. Here, it’s a complete inverse. (The soldiers) deserve the glory. I’m very proud to get the chance to be here.”

As part of the salute to the military, race fans are encouraged to use the hashtag #KnowYourMil.

Through the speedway’s “Patriot Partners” program, race fans or corporate customers can buy a Coca-Cola 600 race ticket to send a member of the U.S. Armed Forces to America’s Home for Racing for just $25.

CMS PR/Photo Brad Keselowski visited Naval Station Norfolk on Thursday to kick off Charlotte Motor Speedway’s Mission 600, a prelude to the pre-race Salute to the Troops before the May 27 Coca-Cola 600. During Keselowski’s visit, he met with sailors, rode in a helicopter and received an inside look at life on the USS Gerald R. Ford. (HHP/Andrew Coppley photo)