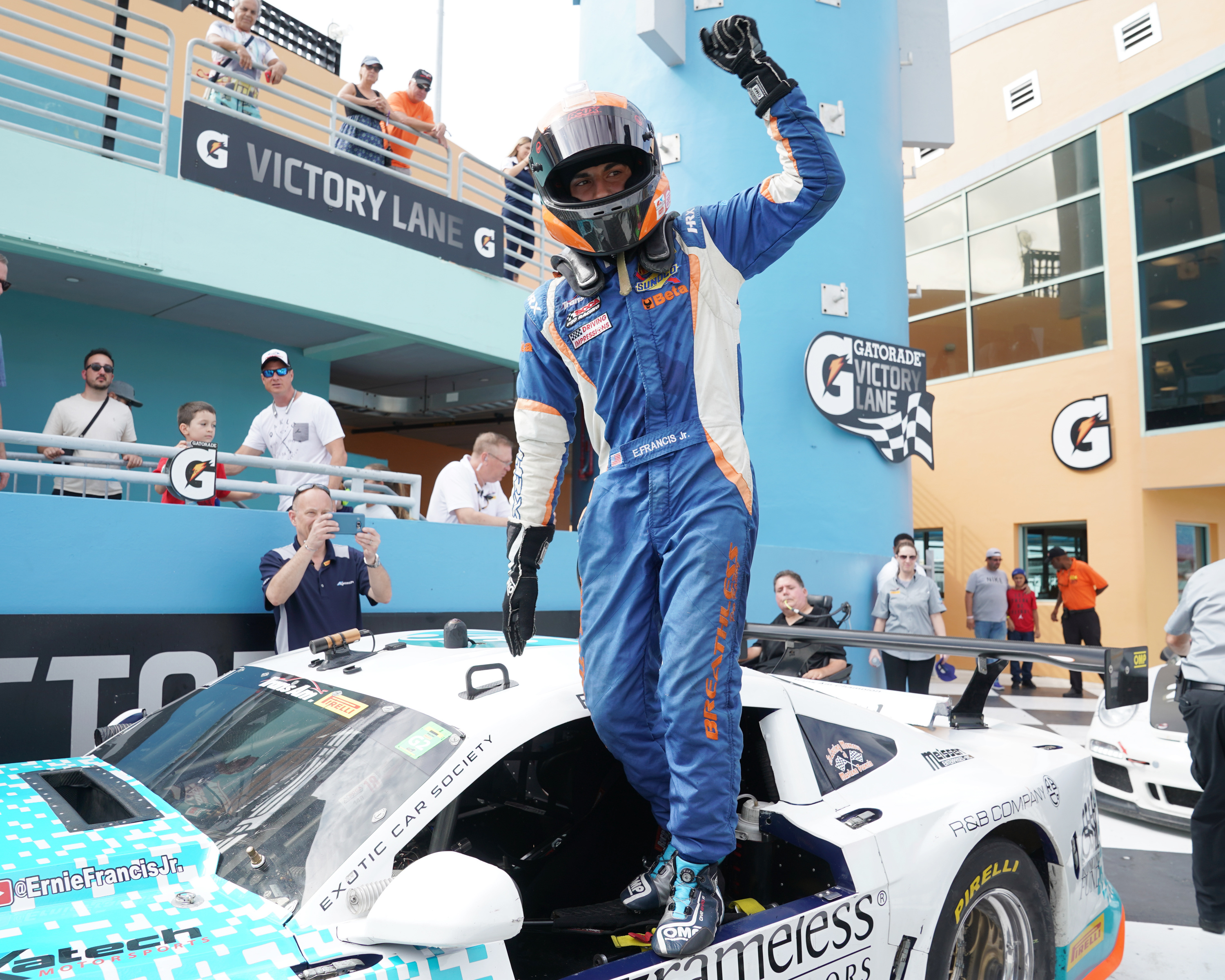 Ernie Francis, Jr., secured his second win of the 2018 Trans Am Championship today by way of a flag-to-flag victory in the South Florida Sports Car Challenge on Homestead-Miami Speedway’s 2.21-mile road course Sunday.   The Southwest Ranches resident and 2017 Champion has now won the past three Trans Am Series presented by Pirelli competitions at Homestead-Miami and set a new track record en route to the winner’s circle.  Shane Lewis shared in the celebrations with a TA3 class victory, outlasting Sebastian Carazo after a battle that spanned much of the multi-class competition.

The victory, the 12th of Francis’ career in the TA class, came in dominant fashion on his home track.  The No. 98 Frameless Shower Doors Ford Mustang often led the remainder of the TA class field by a gap that extended beyond ten seconds— despite being reeled in by a full-course yellow in the middle of the competition.

“This is our home track,” said Francis.  “We knew we needed to put on a good show for our friends and family, but the car was absolutely hooked up today.  We knew we had the pace from the very beginning of the weekend, right off the trailer.  We have a great setup for Homestead-Miami, I have plenty of track time here, and we run old tires during all the testing and practice sessions— it gives you a good feel for what the car will be like here towards the end of the race.  While everyone else was slipping and sliding, our car still was hooked up.”

Francis loves the “home field” advantage that racing at Homestead-Miami Speedway provides, and he has spent a great deal of time at the track, both as a spectator and participant.

Despite the win only coming three races into the 11-round championship, Francis hopes the hometown win will help him go the distances in his TA class title defense, particularly as his multi-series schedule begins to heat up.

“This weekend definitely helps us out,” said Francis.  “We had the points lead coming in but it was a very small margin.  This win definitely gives us a good points lead and will boost us forward for the next race at Indy.”

In addition to his prowess in Trans Am, Francis is one of six members of NASCAR’s 2018 Drive for Diversity driver class.

“I think it’s really awesome to be part of the Diversity Program with NASCAR,” Francis said. “It’s a great opportunity for me to get out there and start trying to break into the NASCAR community and it’s really where I see myself in the future. It’s where a lot of the big racing names are out there. It’s a great start and I am excited to get this season going.”

The Trans Am Series will return to action at Indianapolis Motor Speedway on June 15-17.

Fans can keep up with the event and all of The Trans Am Series presented by Pirelli atwww.gotransam.com, on Facebook at www.facebook.com/gotransam and on Twitter at @gotransam.