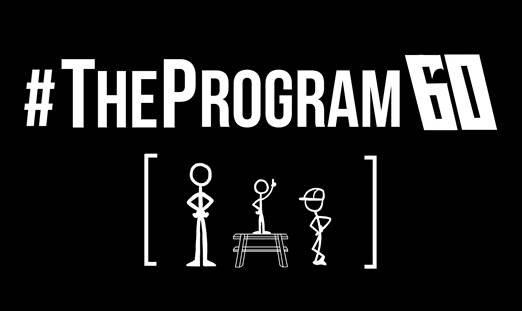 Roush Fenway Racing and Ty Majeski are having a little fun with the up and comer’s Bristol debut this weekend. The team will offer a unique promotion where if Majeski finishes 10th or better they will offer the popular and fast-selling #TheProgram60 T-shirt to the fans at the same price point of Majeski’s finish. Meaning, fans will have good reason to root for a win and $1 shirt sales on Sunday.

“Wow, that’s a lot of pressure,” said Majeski, who is many within the industry believe is one of the most talented young drivers in NASCAR. “I’m just really excited to be racing this weekend at Bristol and I can’t wait to get back in the car. We’ve had a lot of fun with the t-shirts at announcements and photoshoots and stuff and hopefully we can get the fans a really good price on them this week.

“People have asked me if the shirt bothers me, because I’m the smallest on it,” added Majeski. “But I’m fine with that, because if you look closely I’m the one holding up the No. 1 finger in the middle and that’s exactly where we like to be in the middle of victory lane making the No. 1 sign.”

During the off-season No. 60 crew chief Mike Kelley decided to have a little fun with his trio of drivers and set out to have a t-shirt designed for team members that shed a little light on the vastly different physical appearance of the three drivers. Ironically, the final design came from Megan Hillard, the niece of Roush Fenway’s Competition Director, Kevin Kidd. Hillard runs the unique and trendy online greeting card company, The Birthday Pixie.

“We were just having some fun with it,” said the veteran crew chief. “The guys are all so unique and different and great in their own way, and originally it was just something fun to do for the team. Then, the fans got wind of it and started asking for them and we made a few more, and then a few more and it grew from there. We’ve had a lot of fun with it, and we’re going to give the profits to charity and it’s been a great thing from team bonding with all three guys.”

Even Roush Fenway legend and NASCAR Hall-of-Famer Mark Martin, who’s frequent trips to victory lane made the No. 60 famous, has been seen in the popular shirt in support of the three up-and-coming drivers.

Majeski is part of a three- driver lineup with Chase Briscoe and Austin Cindric as part of a Ford development program. Briscoe and Cindric have kicked off the season and Bristol will be the first of 12 races for Majeski behind the wheel of the famed No. 60 Ford Ford this season for Roush Fenway Racing.

Majeski, who will run SunnyD on his Ford this weekend as a part of the #SunnyDTakeover weekend at Bristol, made three starts in the No. 60 in 2017.  The highlight of those three starts came at Homestead where he qualified ninth, ran in the top 10 for a majority of the 200-lap race and crossed the finish line 10th.

In addition to Bristol, Majeski will also race Talladega, Dover, Charlotte, Iowa, Kentucky, Road America, Richmond 2, Charlotte 2, Kansas, Texas and Phoenix behind the week of the No. 60 Ford this season.

#TheProgram60 T-Shirts can be purchased at RFRShop.com!