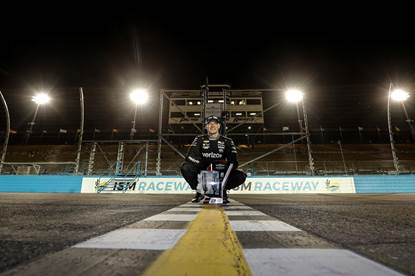 Josef Newgarden trusted that when his race strategist, Tim Cindric, called him down pit lane – from the lead – under caution with 17 laps remaining in the 250-lap race, that four new tires were going to be the ticket to victory lane.

The defending Verizon IndyCar Series (VICS) champion blended back into the field for the restart in the fourth position.  When the green flag flew, he was second by the end of the first green lap and set his sights on the leader.  With three laps to go, his four new tires were no match for Robert Wickens as he swept around the outside to take the lead and capture his first win of the 2018 season behind the wheel of the No. 1 Verizon Team Penske Chevrolet.

“We had everything,” said Newgarden from Winner’s Circle.  “We had the whole package, we had the Team Chevy power and we had the fuel mileage from Team Chevy that we needed.  It’s great to be able to have Verizon on the car finally and getting victories for them feels so good.  This was a Team Penske victory. It wasn’t just me. It was all these guys.”

The win was the eighth of Newgarden’s VICS career and his first at ISM Raceway located just West of Phoenix, Arizona.

Ed Carpenter, No. 20 Fuzzy’s Vodka Ed Carpenter Racing Chevrolet finished seventh in his first race of the 2018 VICS campaign, followed by Tony Kanaan, who had a strong showing in his second race driving the No. 14 ABC Supply Chevrolet for the legendary AJ Foyt in eighth spot.

Giving Chevrolet four of the top-10 finishing positions overall in the second round of the 17-race season was Simon Pagenaud, No. 22 Menards Team Penske Chevrolet taking the checkered flag in 10th place.

Starting third, Power was a strong contender leading 80 laps in the first half of the race but contact with the wall after avoiding another competitor caused significant damage to the right side of the car and forced the 2014 IndyCar champion to retire from the race after 153 laps.

Next on the calendar for Team Chevy in the Verizon IndyCar Series is the Long Beach Grand Prix, Sunday, April 15th.

This is Josef’s eighth career win, also moves him into the points leader position with 77 points. His last win came last August also on a short oval at Gateway Motorsports Park.

Josef, an exciting race for you guys tonight. I heard you talking since the victory. You said a lot of the pit stops and strategy called from your team really won the race. Take us through your race and ultimately how you ended up in Victory Lane.

JOSEF NEWGARDEN: Yeah, I think it was a team win tonight. I don’t know that I deserved to win the race tonight, but I think the team did. They did a really good job on strategy, pit stops were unbelievable. I think I gained like five or six positions on just the first stop, which was awesome. They did a great job.

I think we were a top five car tonight for sure. I felt kind of top five-ish. But I struggled a little bit with the balance. So it was difficult for me to force the issue until we got to the end when I had a tire advantage. I knew I could force the issue. I kind of bided my time for that. I was trying to be calm tonight and make it to the finish.

The team, they did such a good job. The car was good. The strategy was better. The pit stops were the best. So I’m really proud of them and what they did. I think they deserved the win tonight. I was proud to drive the car with Verizon and Team Chevy.

THE MODERATOR: A lot of talk heading into this race about how the universal aero kit would play into the race strategy and race performance here. What are your overall impressions of how the first time the new car went worked at Phoenix?

JOSEF NEWGARDEN: Yeah, it was challenging. It was definitely a very challenging race to find what you needed from the car. You did have moments where you got stuck. For me, I couldn’t attack as much as I wanted to. I had top five speed, but my attacking ability was low tonight. I wasn’t really able to do much.

I think the first stint was actually my best. We kind of were dialing it in, dialing it in. We definitely got there at the end. I think that last stint was really good for us, but we were saving fuel, so we didn’t really get to see how great the car was there.

But I hope it was a good race. I hope people enjoyed it. It was challenging from the driver’s seat, no doubt. If that translated to TV, to the audience, I don’t know. I mean, I haven’t watched it yet. It was very difficult inside the car.

Whenever you have a situation like the end there with the restart, you have different tire strategies, that always makes it more fun. If it wasn’t a good race, I hope we saved it there at the end with a huge mix-up and a little bit of fun to the finish.

THE MODERATOR: Speaking of the tires, you’ve been very complimentary of them tonight. Firestone-Bridgestone’s 500th win since their return to IndyCar racing. What does that mean to you as a driver to know you’ve notched their 500th win?

JOSEF NEWGARDEN: It’s cool. I’m not big into stats, but that’s a cool stat for sure. We have a lot of trust and faith in Firestone, and the parent company Bridgestone. They’ve done a great job in the IndyCar Series for many years, dating farther back than ’95. To be a part of the series with them has been a lot of fun.

Congratulations to them. Hopefully we do another 500 together. It should be a blast. They’ve always delivered for us. I have nothing bad to say about Firestone, they’re one of the best in the business.

THE MODERATOR: Questions for Josef.

Q. You said earlier you gained position at the pit stop. Until the first caution came out when Fittipaldi crashed into the wall, there were no changes in the front. Looked like all cars nearly went the same speed. Hunter-Reay was in front of you. Was there no way to catch him?
JOSEF NEWGARDEN: It was tough. I would have some runs on Hunter-Reay sometimes, couldn’t really do it. Same thing for him. We were trying to get through lap traffic. He couldn’t do much either with the conditions directly in front of him.

I think for me not feeling as confident to attack tonight. That’s what I just tried to do, was be methodical and make sure we played the game right. It worked out for us.

Q. Did you also prove in the battle of track position with warn tires, fresh tires always win? You were on the other side of that once at Iowa.
JOSEF NEWGARDEN: Yeah, yeah, no, I think we were — no, we were on the new tires at Iowa. Me and Hunter-Reay were the attackers. He started out front. I always seem to be on the attacking side, most of the time. He was on old, exactly.

Honestly, I didn’t know if that was the right call. I felt like we finally got our car where we needed to be on the final stint. I don’t want to question Tim. He normally doesn’t let me down, the team doesn’t normally let me down. Whatever they say to do, I’m always going to do it.

I always think, Did we do the right thing? It’s natural to think that. I think after running the race, we did the right thing. It was good to have new tires. For me it made the difference. I’d rather be the attacker there with people that had 50 lap old tires. I could make something happen there at the end.

That was the best car we had all night, was the final stint. I think we were ready to kind of drive that way toward the end, and it was the right moment.

Q. Talk a little bit about your thoughts of Robert Wickens, how strong he has been at the start of the season as a rookie.
JOSEF NEWGARDEN: No, he’s a stud. I’m sure you guys think so. He always has been. He’s not new to motorsports. Robert has been one of the best drivers in the world I think for many years. He probably should have been in IndyCar a lot sooner than this. People will argue that. He’s a North American guy. One of the best out of Canada that we’ve had over the last 10 years, in my opinion. It’s good to have him in the series. He deserves to be here.

I think he’s already proved his worth for driving in IndyCar. He’s come at a great time. It’s a new car. It’s been very challenging, and rookies seem to be shining. Robert is very capable.

Q. You made the final lap after the caution, the last six, seven laps, very exciting. Were you really taking a lot of risks because you seemed to get up to Robert but not quite past him, then finally got by him? I didn’t know if there were a lot of marbles up there. Talk about getting by him.
JOSEF NEWGARDEN: The last pass was risky. I didn’t know how that was going to go. The first one I felt pretty confident in. I analyzed it. I was, like, I think that will work. It was premeditated. The last one, I didn’t know I had to do that. When I was sizing him up, I was like, Man, this is the only way this is going to work out. I didn’t know if it was going to work, but it was good.

The tires make a huge difference. I had 50 lap newer tires. With that, with how much he had to check up in T1, he gave me just enough room. I didn’t have to get crazy high. That one I definitely took risks. I think sometimes you have to do that in the right position, and I think it was the right time to do it tonight.

Q. It’s almost like the three drivers on the podium tonight could be a preview of the three drivers battling for the championship. Do you feel those two guys are going to be in it?
JOSEF NEWGARDEN: Yes and no. I mean, I think both Rossi and Wickens will be strong all year. Honestly, I’d be surprised if you don’t get a lot of yo-yoing between the whole field this year. Seems like this with new car, until everybody figures it out, there’s going to be a lot of back and forth with the grid. People will make mistakes, people will mess up in qualifying. I think you’re going to see a very mixed-up grid more times than not this year.

But Rossi and Robert specifically, yeah, I think they’re going to be in the battle. They’re both very good. Yeah, I’d be surprised if they don’t keep up their pace like they had at the beginning of the year.

THE MODERATOR: Josef, congratulations. We’ll see you next week.

JOSEF NEWGARDEN: Thanks, everyone.