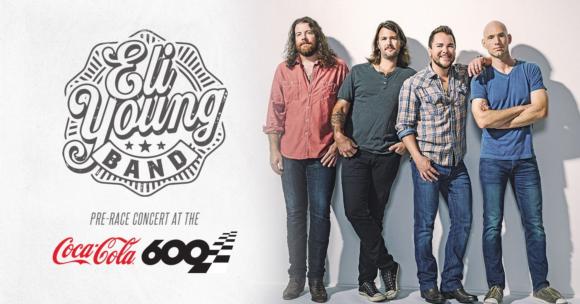 Get ready for the Eli Young Band to turn up the excitement prior to the legendary Coca-Cola 600 on Sunday, May 27 at Charlotte Motor Speedway. The platinum-selling, Grammy-nominated country music superstars will amp up the most patriotic Memorial Day weekend event in sports, with the Coca-Cola 600 Pre-Race Concert electrifying a spectacular salute to the troops at America’s Home for Racing.

The concert takes place just hours before the stars of NASCAR compete in racing’s only 600-mile event and the toughest test of man and machine. Additionally, the Eli Young Band concert is FREE with the purchase of any Coca-Cola 600 race ticket.

“The Coca-Cola 600 has been one of the world’s biggest NASCAR races for as long as I can remember,” said lead vocalist Mike Eli. “It’s a privilege for us to get to bring the party to NASCAR and Charlotte Motor Speedway on Memorial Day Weekend. We’re going to say thanks to the troops and party with the race fans for one hell of a show!”

Known worldwide for chart-topping hits including “Crazy Girl” and “Even If It Breaks Your Heart,” the Texas-based group will perform a rocking concert in front of a roaring crowd of race fans ready to salute America’s freedom one of the year’s most patriotic weekends.

In addition to the concert, fans will enjoy Charlotte Motor Speedway’s annual patriotic pre-race show which will honor America’s troops. This year’s spectacle includes monstrous military vehicles, elaborate military demonstrations and aerobatic exhibitions sure to spice up the action before the green flag flies.

OVERVIEW:
The Eli Young Band Coca-Cola 600 Concert will kick off pre-race festivities for the Coca-Cola 600 on an infield stage located on pit road. The concert is FREE with the purchase of any Coca-Cola 600 race ticket. Fans can get stage front, pit road access for the concert and driver introductions by purchasing an additional pre-race track pass.

TICKETS:
To purchase tickets, camping and pre-race track passes, fans can call the speedway ticket office at 1-800-455-FANS (3267) or shop online at www.charlottemotorspeedway.com.