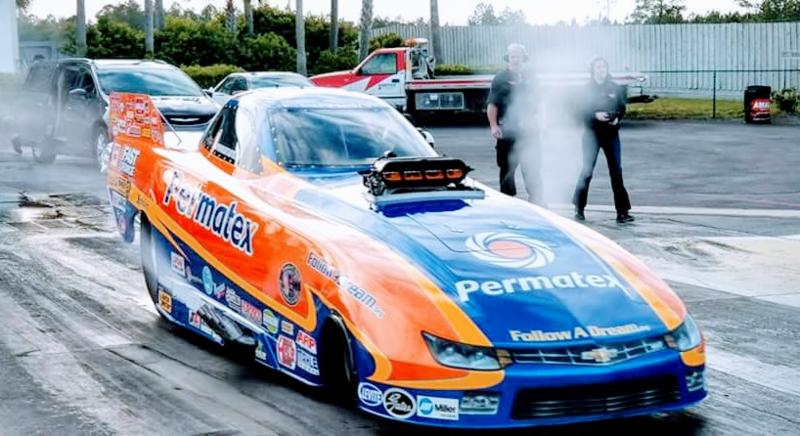 It was not the season debut that the Follow A Dream/Permatex Top Alcohol Funny Car hoped for in this past weekend’s NHRA Lucas Oil Drag Racing Series Southeast Division event in Gainesville, Florida.
However, the team has high hopes for this weekend’s NHRA Mello Yello Drag Racing Series national event, the Amalie Motor Oil Gatornationals, also at Gainesville Raceway.
In the Lucas Oil event, the Jay Blake-owned team had plenty of power, but lost a close battle in the first round of eliminations this past weekend to eventual event winner Sean Bellemeur.
Having qualified seventh, Follow A Dream driver Phil Burkart covered the quarter-mile in 5.685 seconds at 266.42 mph, losing to Bellemeur’s 5.663 seconds/267.85 mph effort.
“We struggled,” Blake admitted. “Unfortunately, we didn’t make many changes over the season, but we made slight changes. I’d say it put us a little bit more behind than we thought.
“While we lost to Sean Bellemeur, he did go on to win the race, which is what I always call a saving grace, that we lost to the guy who no one else could beat as well.
“The team worked hard and everybody did a great job.”
Blake was very excited about the power the motor in the Follow A Dream Chevrolet Camaro put out during the weekend, and expects bigger and better things for the Gatornationals, one of the premier events on the NHRA national schedule.
“Each run, we got better,” Blake said of last weekend’s divisional race. “And we learned more and the car is settling in a little bit and the crew is settling in a little bit.
“It’s not like we’re in total chaos, so I think we’ll be okay for the (Gatornationals). We’d be much happier if we were running 40s and 50s, but we never got out of the 60s.
“But the car is making a bunch of power. We just have to tweak the management a little bit. The conditions were great there in Gainesville, it was rocket fast, and we expect more of that this weekend.
“Last weekend, it was just a matter of finding the happy spot on the setup. We didn’t change much over the winter and thought it would come back quicker. We did make some changes to the fuel system and it took some time to figure that out and the clutch a little bit.”
NHRA national events are something Blake and the rest of the team always look forward to because the best Alcohol Funny Car teams typically enter. It will be a good measuring stick for how the Follow A Dream team goes forward after the Gatornationals.
“I think we’ll do well,” Blake predicted. “We’re just going to continue improving on what we had going this past weekend. We can win it, there’s no doubt about it. We have the team and car and all the pieces to win.”
While the team remained in the Gainesville area following last weekend’s race, Blake began this week with speaking engagements in Orlando on Monday at Mid-Florida Technical College and Tuesday at Universal Technical Institute.
Follow A Dream PR