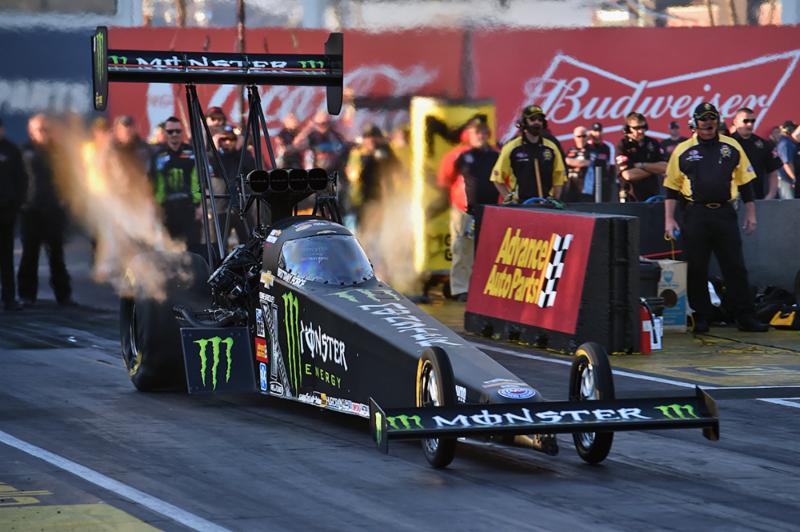 In 2016 Brittany Force captured her first Top Fuel national event win at the historic NHRA Gatornationals in Gainesville, Fla. The Monster Energy Top Fuel driver secured the first John Force Racing double up win and shared the winner’s circle with teammate Robert Hight. This year Force is returning with Hight as the reigning Top Fuel and Funny Car world champions, respectively. It has been a whirlwind two years for the seven-time Top Fuel national event winner and Force is looking forward to getting back to the site of her first victory.
“Gainesville will always be a special track for me. My Monster Energy team had been chasing down our first win since my rookie season in 2013 and we made it happen at the Gatornationals in Gainesville,” said Force. “A first win is something a driver will never forget. That win was the first Top Fuel win for John Force Racing and the first double-up win with teammate Robert Hight. That track, that day is something I’ll never forget and I can’t wait to get back to the Gatornationals this weekend.”
The second woman to win a Top Fuel championship started her 2017 title defense at the season opening Winternationals a month ago in dramatic fashion. In the opening round of eliminations just two hours after receiving her Mello Yello NHRA world championship ring and jacket Force was involved in a horrific crash racing beside Terry Haddock as her Monster Energy Top Fuel dragster careened across the race track and then barrel-rolled. Force escaped serious injury but did spend one night in the hospital for evaluation and to manage some serious bruising.
“Honestly that whole day is kind of a blur. But standing on that stage at driver introductions and receiving my championship ring and jacket was something that I had been looking forward to. Seeing that championship ring only gives me and my team more motivation going into the rest of the season. It proves that we did it once and we’re going to fight to do it again,” said Force.
“I don’t remember any of the crash. The last thing I remember is staging the car. The next piece I remember is the Safety Safari helping me out of the car. I remember looking down at this mangled mess and thinking someone had wrecked,” explained Force. “Then I realized the mess was my car. After that I remember bits and pieces but I do remember my whole family in the hospital with me. My first question was what happened. My next question was what about Terry Haddock in the lane next to me.”
Two weeks later Force was back in the seat racing at the NHRA Arizona Nationals. The three-time NHRA Arizona Nationals finalist was refitted into her 2017 championship winning Top Fuel dragster and she made four qualifying runs, qualified and picked up a first round win.
“I flew into Phoenix early and headed straight out to race track to meet up with my team,” Force said. “I suited up and got belted back into my car that I ran all last season. It honestly felt good to be strapped back in and I was surprised how comfortable I was. I was looking forward to getting back in my car and getting back in the swing of things with my guys.”
The past three years Force has qualified in the top half of the Gatornationals field and has raced to at least a quarterfinal finish every year. Last year Force qualified 4th and was ousted by Steve Torrence in the second round. Force and Torrence would battle all season for the Top Fuel championship.
Qualifying at the NHRA Gatornationals starts Friday with sessions at 2 and 5:45 p.m. and continues Saturday at 12:30 and 3:30 p.m. Eliminations will begin at 11 a.m.
JFR PR