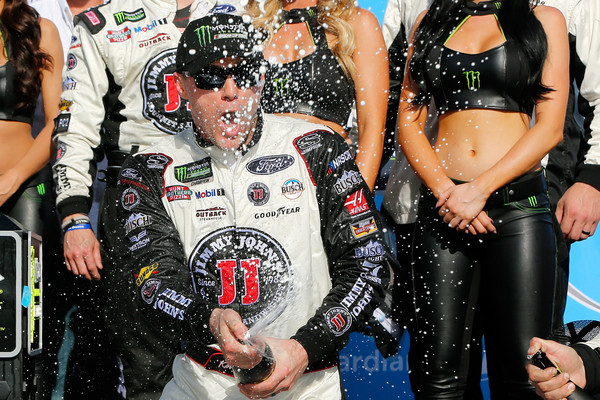 VICTORY LANE INTERVIEW:  “I’ve been mad as all get out because this team does a great job. This organization does a great job and we’ve got fast race cars. And to take that away from those guys just really pissed me off last week. To come here to a race track that is so good for us is a lot of fun and everyone was just determined this week and we just wanted to just go stomp them. We didn’t stomp them, but we won. That’s all that really matters. Just proud of this team. Put a fire in our belly. I’ve just got to thank everyone at Jimmy John’s, Busch, Ford, Mobile 1, Outback, Hunt Brothers, Morton Buildings, Textron, Liftmaster, Haas Automation. I always forget the owners. Gene Haas and and Tony Stewart. What a badass team right there!”

“It was a solid day. We just have to get better as a team. I buried us a little bit in qualifying. It was a good run for us. A good run for Stewart-Haas Racing. We weren’t very good here last year. We sucked as a matter of fact, so that is a breath of fresh air after stubbing our toe last week. Having a good run today is definitely some positive mojo going.”  THREE IN A ROW FOR YOUR TEAMMATE: “Yeah. That there is a statement.”

“We just keep plugging away. Johnny and the guys made a lot of good adjustments on the car throughout the day. We started off okay and then we started dialing ourselves out the first few stops. We got some track position there with that two-tire call and got our Smithfield Ford Fusion up front and it really liked the clean air. Our car got a lot better up there. I am proud of everybody. We just keep building on it. Top-10 ‘em to death. Just keep scoring points and doing what we do.”

“The car responded well to my steering and gas inputs. I was a little slow on restarts but I love being able to lean on the right-rear tire and make passes later in the run. Our strategy unfolded the best it could have to win stage 2 and get back in the top-10. We just didn’t run the same lap times we did at the end as we did at the beginning of the race, but all in all it was a good day.”

WAS IT BRAKES OR A TIRE? “I think the tire went down. The right-rear tire blew. Not sure what caused it. Maybe bead temp or something. I am not real sure what caused it. We will have to go back and look at it. The tire is definitely down. Not sure what came first, the chicken or the egg. It is a disappointing day for sure. We made some good adjustments early and I thought we would be okay. I had a hard time getting in the corner that last run and we started backing up, then something happened to the tire.”

Former Indianapolis winners who still need a win in 2020

Johnson’s last chance to tie Gordon in wins at Indianapolis

Cup Series Going To Indy; May The 4th Be With You