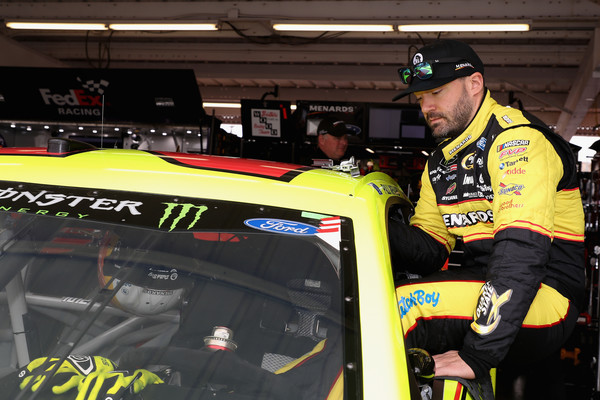 Paul Menard and the No. 21 Menards/Dutch Boy team suffered a rare DNF (Did Not Finish) on Sunday in the Ticket Guardian 500K at ISM Raceway in Phoenix.

On Lap 190 of  312, Menard’s neon yellow Ford Fusion suddenly broke loose and slammed rear first in the outside wall in Turn Two.

The damage was too severe to continue, and Menard was checked out at the track’s care center afterward.

Menard said he thought the bead temperature on the right-rear tire became excessive, something Goodyear later confirmed, but he also said there likely was an underlying issue with his car that led to the tire failure. He had been reporting the smell of smoke in the laps leading up to the crash.

“I am not real sure what caused it,” he said. “We will have to go back and look at it. The tire is definitely down. Not sure what came first, the chicken or the egg.”

Menard said that while he had dropped to 24th place by the time his tire blew, his car was capable of running much better than that. After numerous adjustments on pit stops, he had moved as high as 17th place a few laps before the crash and felt he was in position to gain even more.

“It is a disappointing day for sure,” he said. “We made some good adjustments early, and I thought we would be OK.

“I had a hard time getting in the corner that last run and we started backing up, then something happened to the tire.”

Menard wound up being credited with 36th place, which caused him to drop from ninth in the points standings to 14th heading into next week’s race at Auto Club Speedway in Fontana, Calif.