50 Days to NASCAR’s Biggest Party! The “Big One on the Blvd” Ready to Roll into Talladega Superspeedway 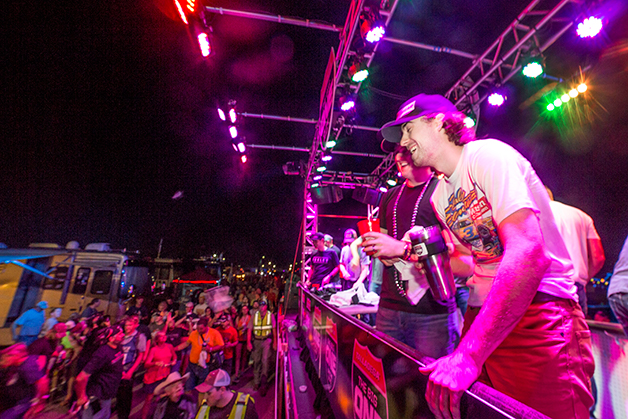 There are exactly 50 days until the “Big One on the Blvd” at Talladega Superspeedway on Friday, April 27, and the anticipation for the biggest and best party in NASCAR is growing with a new lineup of fan challenges!

The wildest, most undeniable evening of fun, is part of the track’s tripleheader weekend which includes the General Tire 200 (set for a 5 p.m. CDT start earlier in the day on Friday), the Sparks Energy 300 for the NASCAR XFINITY Series on Saturday, April 28, and the GEICO 500 for the Monster Energy NASCAR Cup Series on Sunday, April 29.

The “Big One on the Blvd” is scheduled for a 7:30 p.m. start in the track’s infamous infield, featuring some of NASCAR’s biggest stars making their way down the notorious Talladega Blvd on a Mardi-Gras style float. The attention will then turn to the fans who will take center stage near the Miller Lite Pavilion and partake in four new, outrageously original “fan challenges” in which the drivers will oversee. They include:

Fans can sign up here www.talladegasuperspeedway.com/bigone for a chance to participate in one of the competitions and claim bragging rights that will be etched in the “Big One on the Blvd” history.

All Renewal Guest ticket holders, infield camping guests and fans who purchased an infield wristband can join in on the festivities. Be sure to bring your ticket for access. For information on the “Big One on the Blvd,” or general ticket information for all three days of racing, call 855-518-RACE (7223) or visit www.talladegasuperspeedway.com.

*Signing up for a competition does not guarantee a spot as a competitor. Talladega Superspeedway staff will select the final list of game participants.