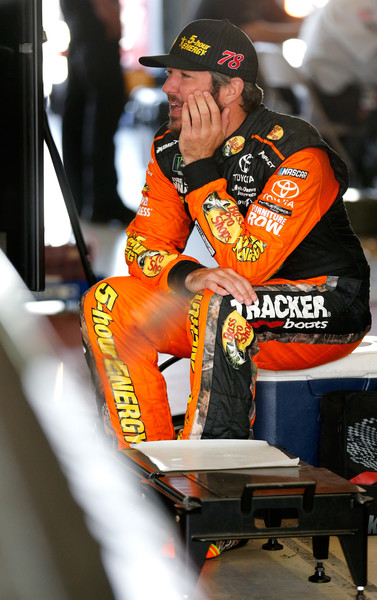 If anyone thinks that Martin Truex Jr. is only strong on intermediate tracks then they need to take a closer look at his recent history.
The timing of the conversation is topical since the next NASCAR Cup Series race is Sunday at the 1-mile ISM Raceway near Phoenix where Truex will drive the No. 78 5-hour ENERGY/Bass Pro Shops Toyota Camry.
Truex, who has claimed 10 straight top-five finishes on 1.5-mile ovals, has also proved that he is strong on tracks of one mile or less in length by scoring four consecutive top-five finishes. And if it weren’t for a questionable late-race caution at Richmond Raceway in September, Truex would have most likely won the race to make it five-straight top-five results.
The caution at Richmond with three laps remaining erased Truex’s comfortable lead on the .75-mile oval. To make matters worse in Richmond, Truex got slammed into the wall on the final lap, dropping him to a 20th-place finish.
Following Richmond, Truex’s finishes at tracks of one mile or less were: fifth (New Hampshire), fourth (Dover), second (Martinsville) and third (Phoenix). The third-place finish last fall at Phoenix was a career best for Truex at the Arizona track.
“We’ve made a lot of progress with our short track program and hopefully it will continue to get better this year, starting this weekend at Phoenix,” Truex said. “We had a good run there in the fall last year and had a shot at winning.
“I would say the spring and fall races at Phoenix are pretty similar but the mindset early in the season is different. Running at a short track for the first time in the season gives you an idea where you stack up. You want to have a strong run in the first at Phoenix so you know what to take there for the fall race.”
The Furniture Row Racing driver said it’s pretty basic about what it takes to be successful at Phoenix
“Phoenix is a typical short track — you have to have that good center turn and be able to drive off the corners,” Truex explained. “You also have to find a happy balance with the car and need to be good on restarts and long runs.”
Truex, who captured his first NASCAR Cup Series championship last year, said he is pleased with the start of the season. After two straight top-five finishes on 1.5-mile tracks – fifth at Atlanta and fourth in Las Vegas, he enters the Phoenix race fourth in points, the same standing positon he was in at this time last year.
“Our performance has been solid so far,” Truex noted. “With the new pit crew rules, the pit guns and a few different car-rule changes I feel we have done a good job starting off the season but do have some things to figure out.
“We just can’t get the balance of our car where we need it. Been struggling with getting the car to turn good enough these last two weeks and when we get that figured out we’ll be right there.”
Truex, who led the NASCAR Cup Series the past two years in laps led, has not led a lap at Phoenix in the last 11 races. His career Cup record at Phoenix includes 24 starts, two top fives, six top 10s, one pole and 101 laps led. His average starting positon is 13.0 and average finish is 17.0.
FRR PR/Photo Brian Lawdermilk/Getty Images