Kyle Busch Bringing the Heat to the Valley of the Sun 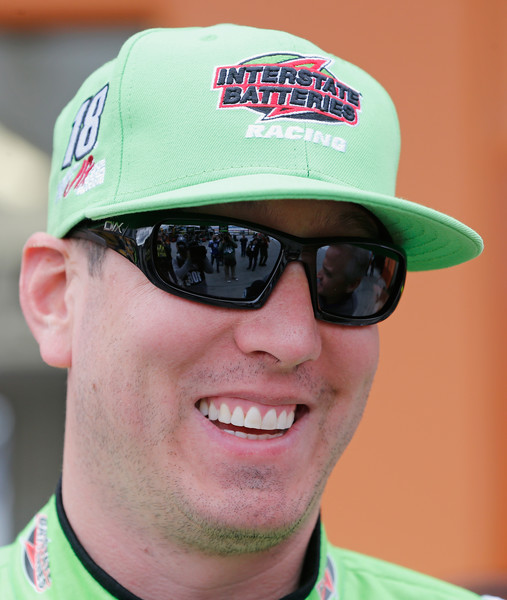 As the “NASCAR Goes West” swing continues in what is already known as the “Valley of the Sun” at ISM Raceway near Phoenix this weekend, Kyle Busch looks to turn up the heat even more during Sunday’s TicketGuardian 500k Monster Energy NASCAR Cup Series race.

The Las Vegas native will feature a new product this weekend as driver of the No. 18 Skittles® Sweet Heat Toyota Camry for Joe Gibbs Racing (JGR). The new, sweet-yet-spicy candy debuted on track last fall at Chicagoland Speedway in Joliet, Illinois and is available at retailers nationwide.

Busch and company will head to the outskirts of Phoenix with the sharp-looking, black Skittles Sweet Heat scheme, accented with the familiar red Skittles colors that will adorn the No. 18 Toyota for three additional races this season. The Skittles brand made its NASCAR debut in 1998 in partnership with MB2 Motorsports on the No. 36 Pontiac for driver Derrike Cope. In 1999, driver Ernie Irvan took the wheel of the Skittles No. 36 Pontiac and went on to take the top starting spot in the prestigious Brickyard 400 at Indianapolis Motor Speedway. Most recently, Busch delivered back-to-back Brickyard 400 victories for Skittles in 2015 and 2016 with candy-splashed victory lane celebrations for the Skittles brand.

After bringing home a strong runner-up spot last weekend at his hometown Las Vegas Motor Speedway, Busch is looking to score his first win of the season and automatically seal a berth in this year’s NASCAR playoffs.

The desert setting of Phoenix was a favorite place to wheel a racecar for Busch long before he joined the Cup Series ranks. Starting with a solid eighth-place finish in his very first Cup Series outing there in the spring of 2005, followed by just his second career Cup Series victory in his very next start there that fall, he’s had many strong runs at the one-mile oval. Coincidentally, Busch’s first Cup Series win came just 10 races prior in another desert-like setting not far from his hometown of Las Vegas – Auto Club Speedway in Fontana, California, where the NASCAR Goes West swing will conclude next week.

In 25 Cup Series starts at the mile oval known as the “Diamond in the Desert,” Busch has one win and an impressive 17 top-10 finishes, including four in a row from the spring 2007 through fall 2008 events, and he won the pole for the spring 2006 race. After leading twice for a race-high 114 laps last March, a late-race caution caused him to finish a disappointing third after a dominant day. Busch will look to get his first Cup Series win with JGR at Phoenix this weekend.

So as the Cup Series moves on to the second of three consecutive races out West, Busch hopes his Skittles Sweet Heat scheme will be just what he needs to help deliver his first victory of the season and continue his hot streak racing in the Valley of the Sun.

How do you feel the potential of the JGR cars is at Phoenix?

“We still have work to do there, but I definitely think we were headed in the right direction there last year in both races. We had a good enough position that we were able to finish well and transfer through to Homestead there last fall, with (Matt) Kenseth and Denny (Hamlin) having good cars there, as well. I’m looking forward to getting back out there and making some laps and hopefully having a good racecar with our Skittles Sweet Heat Camry. I’m excited to have Skittles Sweet Heat back on the car again. Just trying them, they are a cool balance between the usual sweet you get with Skittles, and the heat on the new product.”

How have you adjusted to the transition of the JGR team dynamic now that you’re one of the veterans on the team?

“Yeah, obviously it’s a unique opportunity for me being one of the elder statesmen, if you will, of the sport, let alone at Joe Gibbs Racing, and being able to kind of lead our younger guys, if you will, Erik and Daniel. Those guys have come through Kyle Busch Motorsports, so it’s been fun to watch them progress through the years with the Truck Series, the Xfinity Series, and now being in the Monster Energy NASCAR Cup Series. I’m looking forward to working with them and continuing to see their progress, but also hopefully being able to continue to be one of the leadership guys at our team and being able to race on for championships for years to come.”

What does it take to be successful at Phoenix?

In addition to 10 Xfinity Series wins at Phoenix, you also won in your second Cup Series start at the mile oval and came close last fall, as well. Do you enjoy racing at Phoenix?

“Phoenix is a pretty neat place, even though they made some changes with the repave. The track has worn in with racing and the sun, so it’s getting back to a fun place again. It will be interesting to see starting in the fall how the place races with the change in where the start-finish line is and how that changes the racing, if at all. For some reason, I’ve always run well there. I don’t know if it’s that I’m comfortable being back close to home on the West Coast, or what. I always have a little more fan support out there, as well. As for the track itself, you have two distinctly different corners at Phoenix, which makes it fun and challenging all at the same time.”