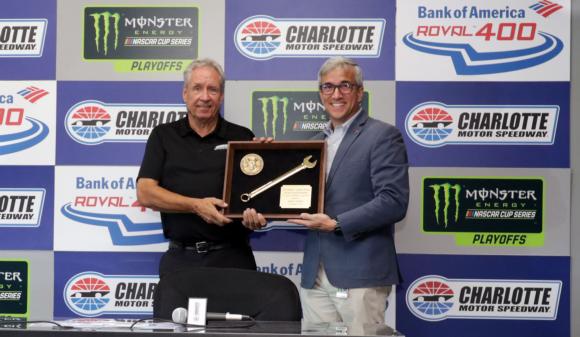 Presented annually since 1997 to honor famed mechanic Henry “Smokey” Yunick, the award recognizes an individual who rose from humble beginnings to make a major impact on the motorsports industry.

“There are a lot of people I have to thank along the way, especially Jack Roush,” Fennig said. “Without all of the people we couldn’t have done it. We put in a lot of hard work. To receive this award is very special. … This ranks right at the top, almost rewarding as winning the Daytona 500.”

Fennig also spoke of the drivers he has been honored to work with during his career.

“All of them were good,” Fennig said. ”Mark Martin was probably the best, a very demanding driver. All in all, all of the drivers, they were all a pleasure to work with. They all had different styles of driving.”

Jones said his experience at the ROVAL™ has been a special one.

“It’s fun to go to other tracks to see the different configurations,” Jones said. “Especially this. This is not your granddaddy’s Charlotte (Motor) Speedway. This is something new and it’s something that’s exciting. I don’t know how (Hemric) is, butterfly-wise, but I’m nervous as heck for these guys, because it’s going to be awesome.”