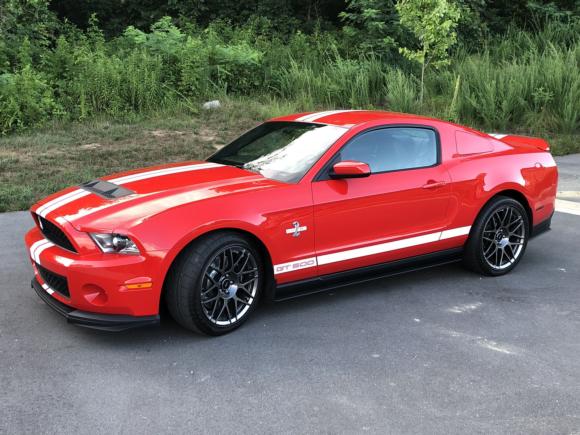 In the 1960s, Carroll Shelby helped American racers dominate over the best from Europe, including Ferrari, but Shelby is best known for the Mustangs and Cobras he sold to the public. His high-performance legacy, which spans more than five decades, will be celebrated with a special display during this weekend’s Pennzoil AutoFair Presented by Advance Auto Parts from Thursday to Sunday at Charlotte Motor Speedway.

After winning the 1959 24 Hours of Le Mans, Shelby retired from racing due to a heart problem, but the Texan’s mind never strayed from speed. He found out that British company AC planned to stop production of its aluminum-bodied Ace roadster because its 6-cylinder engine supply was drying up. At the same time, he learned Ford Motor Company was developing a new generation of small V-8 engines. Shelby crammed the American V-8 into the lightweight British-built roadster and gave birth to a motoring masterpiece.

The high-revving 260ci V-8 (which was soon enlarged to a 289ci version) made Shelby’s 1962 Cobras very successful against Corvettes and Ferraris, playing perfectly into Ford’s plans to dominate international road racing. Just three years later, Shelby American engineers stuffed Ford’s monstrously powerful 427ci V-8 into the Cobra’s tight engine compartment. The job required making the chassis five inches wider, but the effort was worth it. The Cobra 427 – one of the world’s fastest cars – could fly from zero to 100 miles an hour and back to zero in 14 seconds.

To celebrate Carroll Shelby’s lifetime of achievements, AutoFair organizers have assembled a 16-car exhibit that includes a trio of Cobras, a handful of GT-350s and GT-500s, a Series 1 roadster, and the man’s own 1968 EXP500 CSS – a one-of-a-kind GT-500 coupe known as the Black Hornet.

When Carroll Shelby was not producing Cobras and GT-350/500s in the 1960s, he was involved in other high-performance projects, such as Sunbeam’s V-8 Tiger and the super-exotic Ford GT, which was built in Slough, England. The GT (also known as the GT-40) became another weapon in Ford’s arsenal against Ferrari on the world’s race tracks. The final production year for Shelby’s Mustang line was 1969, although some were sold as 1970 models.

The latest evolution of Shelby’s 21st century Mustang – the long-rumored 2019 Shelby GT-500 – will likely produce 700 to 750 horsepower, making it the most powerful production car in Ford’s history.

MORE INFO:
The Pennzoil AutoFair Presented by Advance Auto Parts features more than 50 car club displays and more than 10,000 vendor spaces offering an array of automotive parts and memorabilia. More than 1,500 collectible vehicles of all makes and models will be available for sale in the car corral that rings the 1.5-mile superspeedway. In addition, kids can enjoy face-painting, bounce houses, and other games and entertainment in the Play Zone.

TICKETS:
Single-day tickets are $11 each day for adults. Admission is FREE for children 13 and under with an adult. A 4-Day Weekend Pass is available for just $32. To buy tickets, AutoFair attendees can call the speedway ticket office at 1-800-455-FANS (3267), shop online at www.charlottemotorspeedway.com, or buy them at the gate.