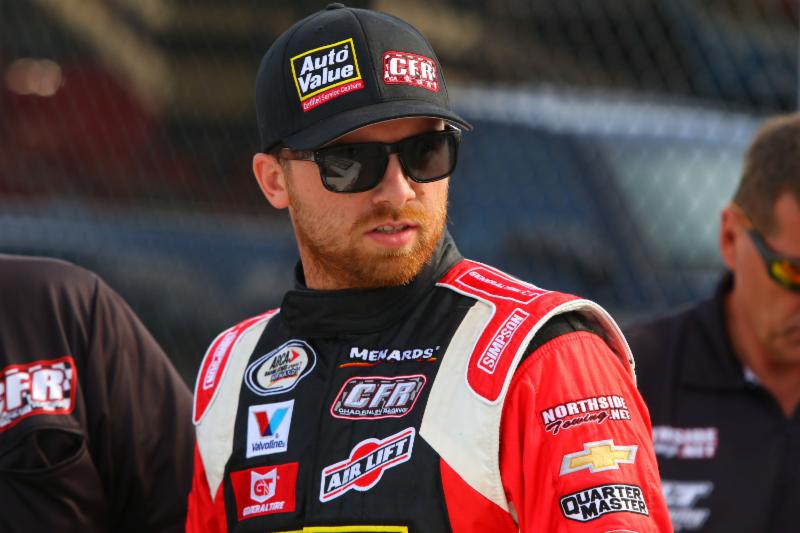 After showcasing their potential Friday morning at Michigan International Speedway with the speed of their No. 51 Auto Value Certified Service Centers | Strutmasters.com | Air Lift Company Chevrolet, Chad Finley and his Chad Finley Racing saw their strong performance spoiled after blowing a right-front tire early in this past Friday’s ZOMONGO 200.
After soaring their family-owned team to the top of the charts throughout the two-hour practice session at the famed 2.0-mile oval, Finley ended practice seventh overall but with the confidence that he the equipment to contend for his second career ARCA Racing Series presented by Menards win.
During qualifying, the team wasn’t satisfied with their 13th place starting position, however, the DeWitt, Michigan native quickly raced his race car inside the top-10 during the early stages race of the 100-lap race.
On the prowl and playing a cautiously aggressive race, Finley’s day took a dramatic turn when the right-front tire appeared to blow on Lap 24 sending Finley’s Chevrolet hard into the outside Turn 3 and 4 wall, abruptly ending their day while running inside the top-10.
Before the accident, Finley and crew chief Bruce Cook felt that their No. 51 Auto Value Certified Service Centers | Strutmasters.com | Air Lift Company Chevrolet was an adjustment away of contending for a career-best outing at his hometown race track.
Chad Finley Quote: “Man, I hate that.
“I hate that for so many reasons. We unloaded with a really fast No. 51 Auto Value Certified Service Centers |Strutmasters.com | Air Lift Company Chevrolet and even though qualifying didn’t go as we had hoped, we still showed early in the race that we had a car capable of running at the front.
“I’m not sure if we ran over a piece of debris or something, because I didn’t have any warning, I just heard a pop and I was along for the ride.
“I’m heartbroken for all of the people who support our Chad Finley Racing team, includingAuto Value Certified Service Centers, Air Lift Company and our newest partnerStrutmasters.com who jumped aboard for this race. I’m very appreciative to them and all of our partners for continuing to stand by our team.
“We’ll bounce back in the next race, we always do.”
Strutmasters.com joined Auto Value Certified Service Centers and Air Lift Company as additional marketing partners for Finley’s 20th career ARCA race. Additionally,Northsidetowing.net, XLT Engineering and Jimmies Wrecker Service and Auto Repair as associate partners.
Next Up:
Herr’s Potato Chips 200 at Madison (Wisc.) International Speedway on Fri., June 15 live on MAVTV.
Chad Finley Racing PR

ASCS Southwest Region Set For 18 Rounds Of Action In 2020