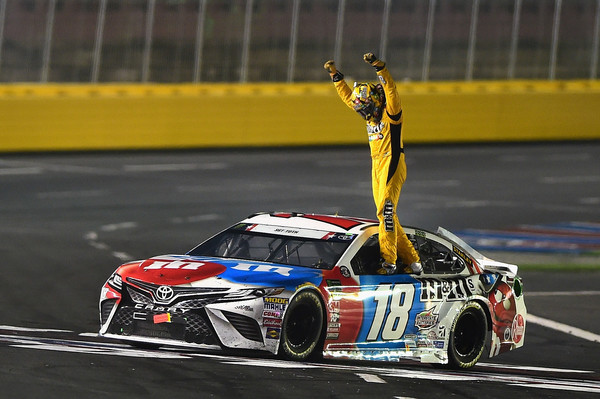 Kyle Busch recorded his first Monster Energy NASCAR Cup Seriespoints victory at Charlotte Motor Speedway on Sunday, and the Joe Gibbs Racing driver did it in dominating and historic fashion in the Coca-Cola 600. Busch became the first driver in NASCAR’s modern era to win a points race at every active premier series track – a feat the veteran driver once considered to be impossible.

Busch left no doubt that his No. 18 M&M’s Red, White and Blue Toyota Camry was the car of the weekend. He won the pole and led a race-high 378 of 400 laps in winning all four stages of the race. Busch was rarely challenged as only Kyle Larson and Martin Truex Jr. appeared to be capable of catching Busch – or even keeping pace with him.

As the race unfolded, though, no one was Busch’s equal. He comfortably led the final 50 laps and beat Truex to the finish line by 3.823 seconds for his fourth victory in 13 races and his 15th career points-paying win at Charlotte across NASCAR’s three national series.

Kevin Harvick, last week’s Monster Energy NASCAR All-Star Race winner and the series’ winningest driver this season with five triumphs, blew a tire and hit the wall 83 laps into the race. Harvick was done for the day after the accident and finished 40th.

KYLE BUSCH, No. 18 M&M’s Red, White and Blue Toyota Camry (Race Winner): “It’s certainly pretty cool, having the opportunity to do what I have been able to accomplish (in winning at every track). We’ve been talking about this in (the media center) for several years now. I was able to finally close the deal out tonight. It feels so good to win here at Charlotte. It’s everybody’s back yard. I grew up watching these races here and dreaming of winning them. It’s so cool to spend a couple of weeks at home. It’s just a phenomenal night. Adam Stevens (crew chief) and everybody was just on it. That Camry was fast. It wanted to stay up front.”

JOE GIBBS, No. 18 M&M’s Red, White and Blue Toyota Camry (Winning Car Owner): “I think for the team, I just appreciate everybody. For our family, our racing families, a lot of our guys don’t get to come to the track and get to experience this. It was just a total family effort. And tonight it was a total team effort. Adam (Stevens) did a great job calling things. When Kyle puts a helmet on he has the most unusual talent. To be able to do what he has done, at the age he is, is just special.”

ADAM STEVENS, No. 18 M&M’s Red, White and Blue Toyota Camry (Winning Crew Chief): “As a team, we’ve been so close to getting Kyle a victory here. Last year we got snookered on fuel mileage there. Today to come out in kind of dominant fashion and win all stages from the pole and to keep it out front was great. And to be able to keep up with the track, we kind of narrowed that gap. It’s important to me to help Kyle accomplish his goals. This was big. It makes the victory a little more sweet.”

MARTIN TRUEX JR., No. 78 Bass Pro Shops/5-Hour Energy Toyota Camry (Finished 2nd): “I’ve been in worse shape before. For us, it was just a battle. I felt like we had the second-best car. We finally got some track position. We didn’t qualify that well. And we got up there behind Kyle, somewhat close. But on the long runs he was just really stout. Those last 20 or 30 laps of a run he could really check out. I had two pit road penalties. So to come back from that, I’m just proud of the team and all the guys in the box. We fought a good race. It’s just hard to balance. It took us a while to get back to the front but we still got back to where we should have. That last run I made up quite a bit of ground on Kyle, but I feel like he was trying to take care of it. Overall it was a good night. We need to find a little more speed but we’re getting close.”

DENNY HAMLIN, No. 11 FedEx Ground Toyota Camry (Finished 3rd): “We worried a little bit about our tire allotment. I think we’re short on tires for this series. We had to stay out one time when we didn’t really want to and that set us back. And, we lost some stage points. Overall we kind of battled back to where we should have been. I think we maximized what we had in our car. We had driven it as fast as it would go. That No. 1 pit stall saved him (Kyle Busch) a couple of times there. We had such fast pit stops with our team. One time we came out right beside him and I really wanted to control that restart. He just barely beat me out of the pits. He never really got in dirty air to see if he could pass. He didn’t pass anyone all day. Their car looked exceptional from my point. They were about a half a tenth (of a second) faster the first 15 laps of a run. And that was just too much to overcome in the long run. We just didn’t have enough on the long runs to run him down anyway. They were just a tiny bit faster. So we just have to look at the data and see where we need to be on speed.”