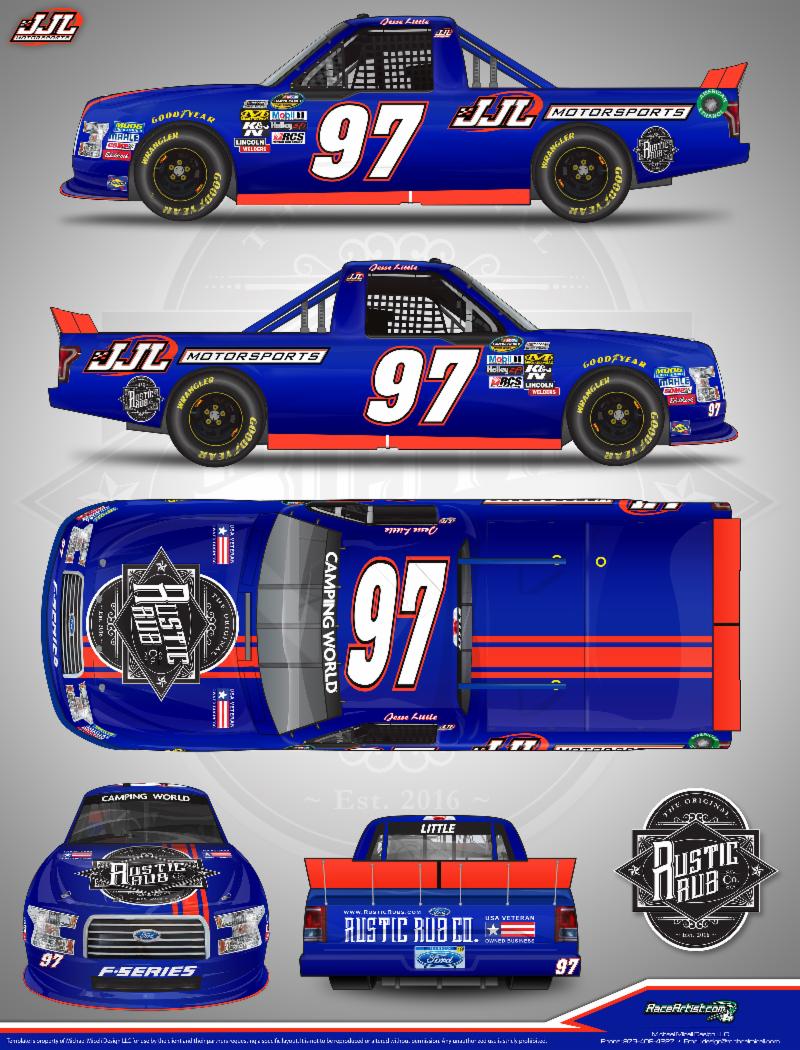 Rustic Rub founder Jim Grindstaff was relaxing at home when he saw a sponsorless Jesse Little and his JJL Motorsports blossom during a NASCAR Camping World Truck Series race at Atlanta (Ga.) Motor Speedway.
Impressed by his performance and his demeanor, Grindstaff wanted to find a way to support the family-owned team. Pledging his support of his Midwest BBQ rub success, JJL Motorsports has added the upcoming Gateway 200 at Gateway (Ill.) Motorsports Park to their 2018 Truck Series schedule.
Founded in 2016 by U.S. Air Force veteran and restaurant entrepreneur Grindstaff, Rustic Rub Co. started as a BBQ rub company initially releasing All Purpose and Three Kings rubs, however, the company’s success has evolved into a brand and lifestyle since releasing their own version of a Bloody Mary mix.
Now, the Belleville, Ill. company – located just 10 miles east of St. Louis, Mo. – – the heart of Midwest BBQ country, products can found in over 50 retailers within the St. Louis and metro-east area; as well as online at rusticrubs.com.
“My kids mean the world to me and letting them watch cartoons in the living room sometimes keep the peace,” Grindstaff recalled of that February afternoon. “The day of the Atlanta Truck Series race was no different. I sat in my bedroom watching the truck race and this blue Ford with orange stripes caught my attention.
“Before I knew it, I was cheering for Jesse Little, the underdog, and how he was showing bigger teams how to get around the track. I consider my company an underdog as well, so becoming an immediate fan and supporter of Jesse’s was a no-brainer.”
“After some initial conversations with the organization, we formed a relationship and we’ll be the primary marketing partner at Gateway and everyone at Rustic Rub is excited. This is an opportunity to accelerate our growth. JJL Motorsports has been outstanding with their support and direction on getting the most of my partnership. I’m looking forward to the race next month.”
Little, 21, has never been to Gateway – but is upbeat about the team’s potential in the June 23 race.
“I just want to thank Jim and Rusticrubs.com for coming on board with us at Gateway,” Little added. “It’s been a pretty good season for us thus far. Charlotte didn’t go as well as we’d hope, but we still had speed and we’re taking that momentum to Iowa and then Gateway.
“As we continue to grow our JJL Motorsports team it’s encouraging and very humbling to know that there are people out there watching us and are cheering us on. Gateway is an opportunity for all of us and we look forward to accelerating to our fullest potential.”
Looking ahead, JJL Motorsports plans to compete in the American Ethanol 200 at Iowa Speedway on June 16, while also having open inventory for funded drivers aboard their Ford F-150s during the summer and fall stretch.
In 16 NASCAR Camping World Truck Series starts, Little has earned three top-10 finishes at Iowa Speedway (2017), Atlanta Motor Speedway and Dover International Speedway (2018) respectively.
JJL Motorsports PR
Post Views: 196