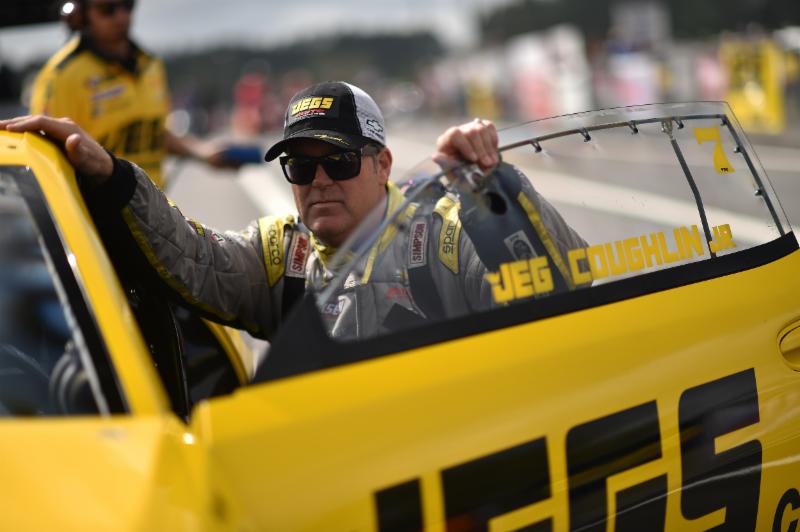 Five-time Pro Stock world champion Jeg Coughlin Jr. will sport a new look at this weekend’s 19th annual Denso Spark Plugs NHRA Four-Wide Nationals when he unveils a new flat-black JEGS.com/Elite Performance Chevrolet Camaro.
“We’re doing something a little out of the norm for us with this flat-black Camaro built by Rick and Rickie Jones and the group at RJ Racecars,” Coughlin said. “It’s a great car that feels really comfortable and we’ve dressed it up with bright yellow JEGS logos on the doors as well as the traditional SS stripes. It’s a really cool look I think the fans will like.

“This car was actually driven in a few events by Richie Stevens and later by Val Smeland but (team owner) Richard Freeman recently reacquired it and we decided after our somewhat roller coaster start to the season to put it in service and see if we can’t break free and run at the top of the class again.”
To that end, Coughlin and the team spent a few days testing in Tulsa, Okla., to get the car tuned to Elite Motorsports standards.
“We’ve got great racecars, lots of horsepower and championship-winning crew chiefs over here so our expectations are always very high,” Coughlin said. “We’ll remain humble and quiet, go about our business this weekend, and see if we can’t get back into the mix. We fully expect to run in top 4-5 every round.”
Las Vegas should be the perfect place for a rebirth considering Coughlin’s history at The Strip at Las Vegas Motor Speedway and the fact he has two chances to win — in the regular national event and the annual K&N Horsepower Challenge, a special race for the top eight Pro Stock drivers from the last 12 months.
Coughlin has won national events in Las Vegas in 2009, 2008, 2002, 2001 and 2000. He’s also a three-time winner of the K&N Horsepower Challenge, having claimed that title in 2009, 2000
and 1999.
“It’s going to be a jam-packed weekend of drag racing,” Coughlin said. “We’ve been fortunate to win our share of national events out there as well as the K&N race. That one always is pretty special because it brings the eight best drivers from our class together. You have to slay the giants to win
that one.
“I think we’re ready. We made 10 passes in testing and worked out all the little glitches you have when you switch cars. We successfully completed every run and the guys were super pleased.”
Prior to the race, Coughlin will take part in a Fan Fest and Autograph session on the Brooklyn Bridge feature in front of the New York-New York Casino on the Las Vegas Strip. Numerous pro drivers will be on hand from 7-8 p.m., Thursday, to meet fans.
Pro Stock qualifying sessions are scheduled for 12:30 and 3:30 p.m., Friday, and noon and 2:45 p.m., Saturday. Eliminations begin at 12:35 p.m., Sunday. FOX Sports 1 will carry the first day qualifying action live from 4-5 p.m., Friday, with more qualifying highlights airing from 8:30-9:30 a.m., Sunday. Live eliminations will air on FOX Sports 1 from 3-6 p.m., Sunday. (All times are local and subject
to change.)
Team JEGS PR