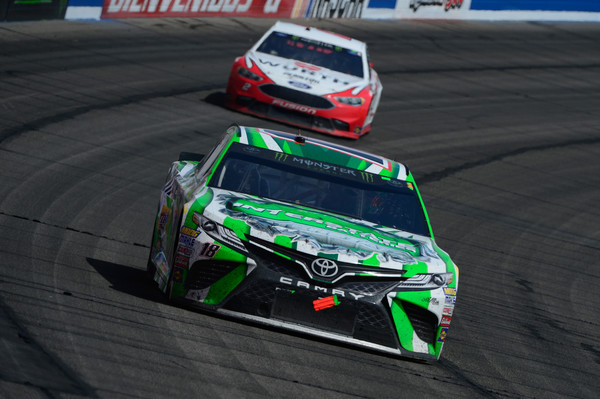 ● After starting from the outside pole position, Busch flexed the muscle of his No. 18 Interstate Batteries Toyota, taking over the top spot on lap 11. Aside from a slightly loose-handling condition in turn three, the car was strong early in Stage 1.

● Busch relinquished the top spot briefly for a round of green-flag pit stops on lap 28. After stopping for four tires, fuel and an air pressure adjustment, the Interstate Batteries driver reassumed the top spot until getting passed for the lead by driver Martin Truex Jr. on lap 31.

● More handling issues developed as Stage 1 proceeded, with Busch noting that the car was starting to handle tight in turns three and four as well as turns one and two. He maintained the runner-up spot to the conclusion of Stage 1.

● At the end of Stage 1 Busch made a stop on pit road for four tires, fuel and chassis and air pressure adjustments.

● Busch quickly made his way from fourth to second during the first lap of Stage 2, but not without challenges. He soon reported that the front end of the car simply would not turn. It was an issue that persisted throughout most of the stage.

● In an effort to fix the handling problem, the team made significant changes during a caution on lap 110, adjusting a spring rubber and wedge, while changing four tires and adding fuel. Busch restarted second but quickly reported that the car was handling way loose, making it impossible to leverage power off the turns.

● Busch managed to hang onto the No. 18 Interstate Batteries Toyota to finish third in Stage 2.

● The Interstate Batteries team went to work at the end of Stage 2, once again adjusting air pressure and wedge, changing four tires and adding fuel. Quick pit work handed Busch the lead for the start of Stage 3.

● Busch was in first place when a caution was displayed on lap 128. Everyone made trips to pit road for tires and fuel. While Busch took four tires, driver Kasey Kahne stayed out and driver William Byron took only two tires, allowing the two drivers to inherit the front row for the restart on lap 132. Busch restarted third but was back in the top spot by lap 133.

● The 2015 NASCAR Cup Series champ held onto the lead until Truex chased him down on lap 157. The two battled for a handful of laps until Busch finally had to settle into second place on lap 161.

● Busch made a pit stop a few laps later in an attempt to improve the handling for the final run. Quick pit work enabled him to take over the top spot one more time, but Truex raced him down just a few laps later, and Busch raced comfortably in second place for the next several laps. He lost one more position before the checkered flag waved, finishing the day in third place.

● This is Busch’s third top-five of the season and his ninth top-five in 20 career starts at Fontana.

“We were hoping for more with our Interstate Batteries Camry today, but we just never could get the car where we needed it. So that was tough for sure, but it’s another top-five finish. We’ll take that and look forward to going to Martinsville next week. It’s been pretty good to us the last few years, so hopefully we’ll be able to do what we need to get a win.”

The next event on the Monster Energy NASCAR Cup Series schedule is the STP 500 on Sunday, March 25 at Martinsville (Va.) Speedway. The race starts at 2 p.m. EDT with live coverage provided by FS1.