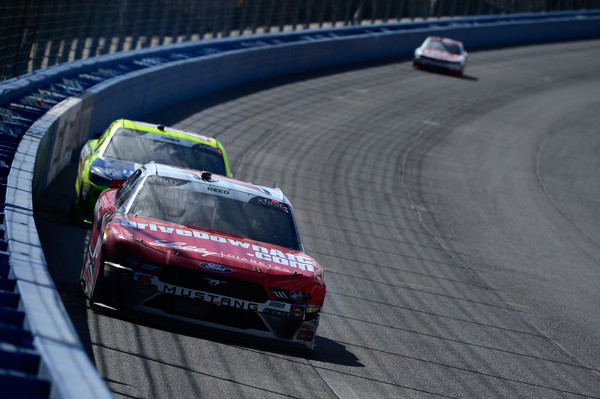 Ryan Reed qualified his No. 16 Drive Down A1C Lilly Diabetes Ford seventh in front of his hometown crowd at Auto Club Speedway, his best career qualifying effort at Fontana.  Midway through the race a power steering issue arose, leaving Reed with his hands full maneuvering his Ford around the two-mile track.  Despite the issue, Reed never gave up and battled until the end to salvage a lead lap 17th-place finish.

“I thought we had a really good race car most of the weekend,” said Reed.  “We started off decent in practice and qualified seventh and I felt like we had a really strong race car for the race.  When we got going early on I was fighting the balance a little bit and felt like if we got our Drive Down A1C Lilly Diabetes Mustang dialed in we would be in contention for a top 10.  We ended up with a power-steering pump issue about halfway through the race, so it was a disappointing end.  It’s one of those deals where you’re going to have mechanical failures in racing and when you do you just have to deal with them.  You diagnose what happened and move on.”

Reed started the race seventh but lost ground over the course of Stage 1 with a “tight center, loose in” handling condition.  A caution came out on lap 31, which led to the first Stage ending under caution.  Reed pitted for four tires and chassis adjustments, lining up 12th for Stage 2.

The power steering issue surfaced on lap 63, and Reed was left battling his Ford until the caution came out closing out the Stage.  The team looked under the hood to try to identify the problem at the Stage break, but to no avail.  Reed was left muscling his Ford around the track.  Despite multiple pit stops and no power steering, Reed was able to hang with the field for a 17th-place lead-lap finish at Auto Club Speedway.