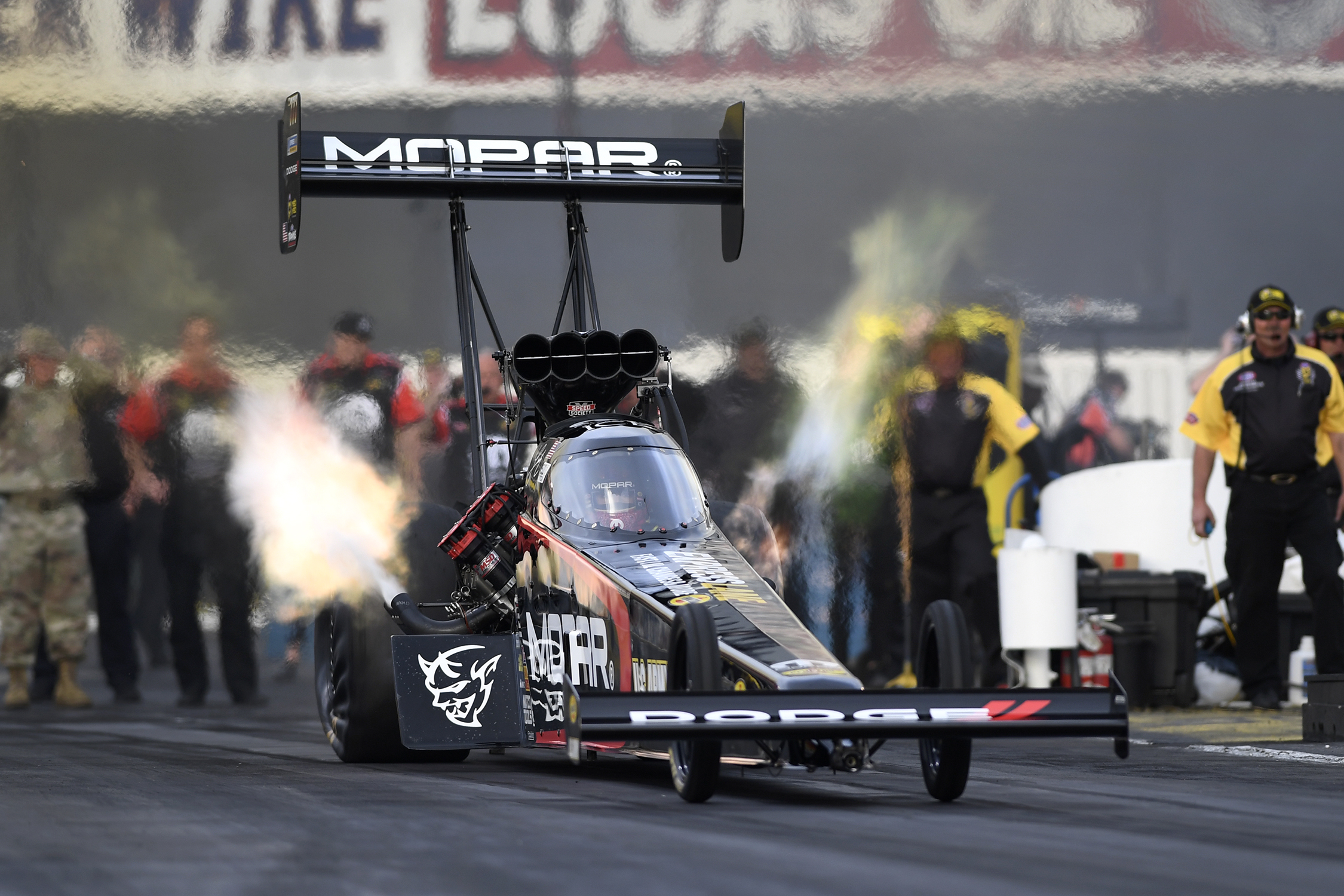 Schumacher and his U.S. Army Dragster team for Don Schumacher Racing (DSR) did not improve on his early-Friday run of 3.785 seconds at 329.67 mph, opening Saturday by shaking the tires at halftrack en route to a run of 4.841 seconds at 146.59 mph. During today’s final qualifying effort, he again lost traction and posted a pass of 5.463 seconds at 122.95 mph. From his No. 4 qualifying position, he matches up against No. 13 qualifier Brittany Force, the reigning Top Fuel world champion.

“I love this race,” said Schumacher, the 2017 Gatornationals champion who’s vying for a record sixth Gainesville event title this weekend. “It’s top three for me without a doubt. We just do so well here and that gives us a ton of confidence. The place was sold out today and fans jammed in here to see us do battle. There’s just something about racing here. We’ve won this race more than anyone else (in Top Fuel) and I’m excited to have another chance Sunday. It’s been a long time since we’ve won a race. I’m hungry. This U.S. Army Racing team is hungry. I’d like to get (crew chief) Mike Neff his first Top Fuel win here tomorrow. A year is too long for us to go between wins. We will do everything we can tomorrow to make it a long day and put ourselves in position to win this thing. It’ll take an incredible effort and I’m fortunate to be surrounded by a group of guys capable of the moment. It’s going to be fun. I’m ready.”

Brown and his Matco Tools/U.S. Army Dragster for DSR also could not improve on his Friday evening run of 3.751 seconds at 327.74 mph that put him No. 3 in the qualifying order after the first day. He lost traction in Saturday’s opening pass that left him with a run of 5.355 seconds at 129.43 mph, and again to close qualifying when he ran 4.392 seconds at 183.69 mph. He ended up third on the elimination ladder and will face No. 14 Audrey Worm in Sunday’s opening round.

“We’re always ready to get after it,” Brown said. “The conditions we had today are what we expect to have tomorrow. We just have to hone in and get the combination right. We’re starting in a good spot and we’re just going to see what we can do. We have to get a little more versatile and adapt to these situations. They are giving out a Wally tomorrow and it’s the Gatornationals. This is one of those races where you have to show up and put up to bring it home. This is definitely one race that we want to win for sure. The fans and all the people that have come out this weekend have been incredible. It’s got us stoked and super pumped and we just want to go out there and perform right now. It would be awesome to get my guys a win tomorrow. Especially with everything this group went through during the offseason. Brad (Mason) and Mark (Oswald) are at the helm and a victory would be great for all of the guys. They have been working so hard and putting so much time in. This is our weekend. I have a feeling, so we are just going to go out there and have fun with it.”

Pritchett carried the U.S. Army Racing torch Saturday by posting a solid run to close qualifying after failing to make a clean pass early in the day behind the wheel of the Papa John’s/FireAde/U.S. Army Dragster for DSR. Pritchett lost traction immediately in Saturday’s opening run and coasted to a lap of 10.137 seconds at 72.12 mph. Despite a strong run of 3.864 seconds at 313.95 mph to close qualifying, she’ll remain sixth on Sunday’s ladder from her first qualifying run Friday of 3.811 seconds at 325.77 mph. She’ll race Terry Haddock in the opening round.

“We’ve been going wide open all weekend here in Gainesville,” said Pritchett, who pulled triple duty Saturday winning her first run in the Factory Stock Showdown and competing against ‘Papa’ John Schnatter in the Charity Challenge race benefitting the Infinite Hero Foundation. “There is so much purpose on the line. A world championship in Top Fuel. Competing in a charity event for our veterans. And of course, factory stock with bolt on parts that you can put on your SRT. All of it is for the win. Thanks for the patience from everyone at DSR and our fans. I’ve got an opportunity of a lifetime and I’m trying to win them all. It’s really an exciting weekend and we’re hoping to have a great tomorrow to cap it off.”