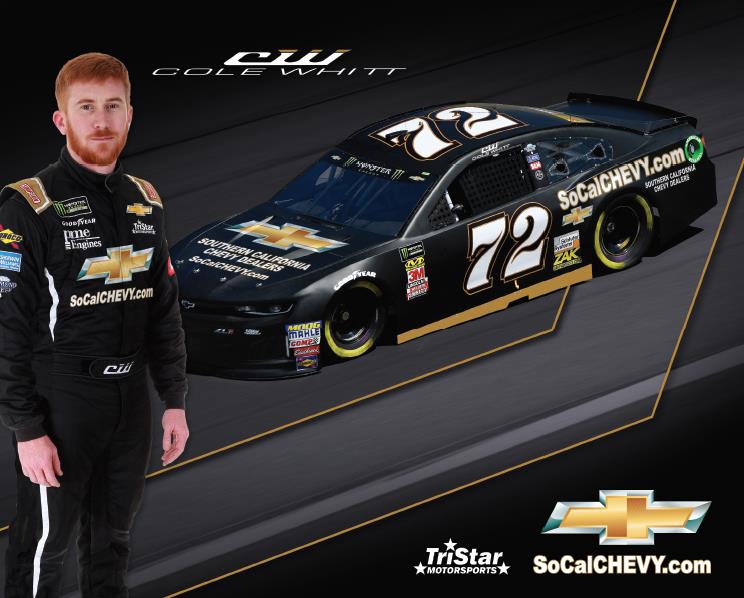 Cole Whitt will assume the driver’s seat of the No. 72 Chevrolet Camaro ZL1 this weekend at Auto Club Speedway for the final stop of the NASCAR Goes West tour. Whitt has four previous Monster Energy NASCAR Cup Series starts, completing 819 laps securing a best finish of 18th  at the 2.0-mile D-shaped oval.
Joining Whitt this weekend, Southern California Chevy Dealers will return as the primary sponsor of the No. 72. Southern California Chevrolet is group of 44 Chevrolet dealerships in the Los Angeles television market. They offer a large selection of new, certified pre-owned, and pre-owned Chevy models with options to purchase or lease. Their extended services include routine car maintenance to keep your Chevy serviced to optimal performance.
“We are glad to have Southern California Chevy Dealers back on board this weekend in Fontana,” says Whitt. “They partnered with us in 2017 and it’s always rewarding to be able to extend and grow a partnership. I personally own a Chevy truck and am a huge fan of their brand. We look forward to the weekend and having SoCal Chevy with us at track.”
Being a native to Alpine, California, Whitt will head to Auto Club Speedway with determination to score a solid finish in front of his hometown crowd in the No. 72 SoCal Chevy Camaro ZL1.
TriStar Motorsports PR