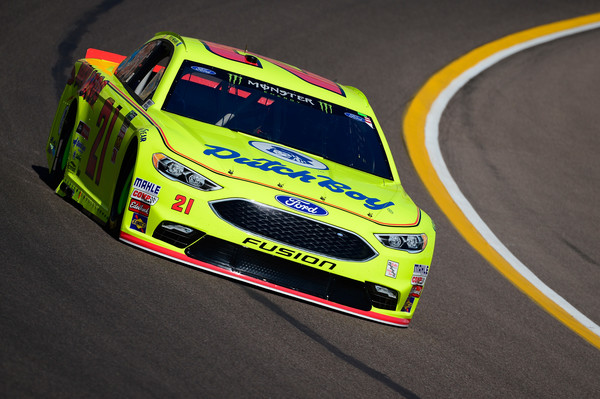 Paul Menard and the No. 21 Menards/Dutch Boy Ford Fusion will line up 14th for Sunday’s Ticket Guardian 500K at ISM Raceway in Phoenix.

Menard and the No. 21 team started the day at the track formerly known as Phoenix International Raceway by posting the 18th best time in the opening practice session with a lap at 136.214 miles per hour.

In the first round of knockout qualifying, Menard moved up the speed chart to 14th fastest with a lap at 134.328 mph, then ran 135.181 mph in Round Two, to again end up 14th. That wound up being his official qualifying lap as he was just a couple of ticks of the stopwatch short of being among the 12 who advanced to the final round.

Team co-owner Eddie Wood said in hindsight the team probably should have had Menard run a second lap the first time out in Round Two.

“We called him in after one lap because the timing we were watching showed him being fast enough to advance to the final round,” Wood said. “That was the correct call, at the time,  because it saved a lap on the tires, and that would have been a benefit in the final round.”

Even so, Menard came within .02 seconds of 12th place, and an additional attempt in Round Two fell short of the speed needed to advance.

“All in all, we’re pretty happy with the way everything went,” Wood said. “We’re looking forward to Sunday.”

The Menards/Dutch Boy team will have two practice sessions on Saturday to fine-tune the race-day set-up for the No. 21 Fusion. The 312-lap Ticket Guardian 500K is scheduled to start just after 12:30 p.m. [3:30 p.m. Eastern Time] on Sunday, with TV coverage on FOX.