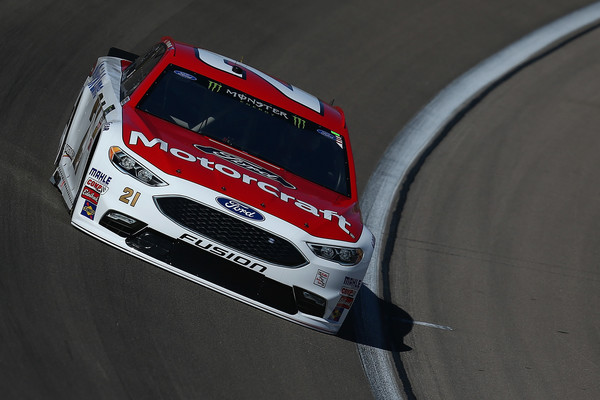 Paul Menard and the No. 21 Motorcraft/Quick Lane team had a fast Friday at Las Vegas Motor Speedway, as Menard posted the third-fastest time in practice and was fastest in the first round of qualifying.

The only hiccup came in the second round of qualifying when the Motorcraft/Quick Lane Ford Fusion developed a tight handling condition, forcing a second qualifying run in that round.

Menard’s extra lap allowed him to move from 17th place into 11th, which put him in the third and final round but also put him at a disadvantage tire-wise entering the final round.

Not surprisingly, given the extra cycle on his tires, he ended the qualifying session 12th fastest with a lap at 188.442 miles per hour.

“We’ve had a really fast Ford all day,” Menard said. “Qualifying was up and down for us. We were the quickest in the first round, and I probably overdrove it in the second round….

“We’re learning and looking forward in getting some more laps on the car tomorrow in practice.”

In starting 12th, Menard will join seven other Ford drivers in the elite 12.

Having tested at Las Vegas in January, Menard and the No. 21 Motorcraft/Quick Lane team hit the track on Friday with good speed, posting a lap at 190.369 mph on Menard’s fifth of seven laps run in that session.

“It was a great effort all day,” team co-owner Eddie Wood said.

After two practice sessions on Saturday, the Pennzoil 400 is set to get the green flag just after 12:30 p.m. (3:30 Eastern Time) on Sunday with TV coverage on FOX.