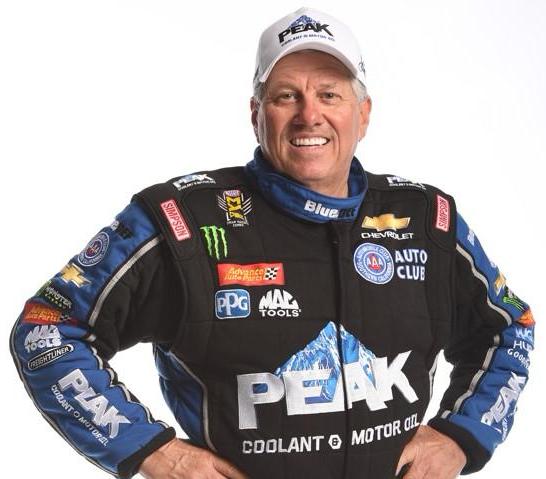 Hall of Fame National Hot Rod Association (NHRA) driver and record holder, John Force, will receive an honorary Doctor of Laws degree from the University of Northwestern Ohio at a special awards ceremony on January 10, 2018 at 1:30pm at the UNOH Event Center in Lima, Ohio.
John Force is best known for his 16 Funny Car championships and 148 NHRA victories. Force’s first championship came in 1990, and he went on an incredible run of 10 consecutive titles from 1993-2002. His most recent championship as a driver came in 2013. In 2017, his teams took home the Top Fuel and Funny Car championships, earning Force his 19th and 20th championships as a car owner. His legacy continues to live on through the next generation of John Force Racing drivers including daughters Courtney, Brittany, and son-in-law Robert Hight.
Force’s popularity transcends sports, as he has been featured in a popular reality TV show, “Driving Force,” on numerous magazine covers, in newspapers across the world, and on television and radio. He’s long been a fan favorite for his enthusiastic personality and approachability toward all who meet him, and fans pile around the John Force Racing pit area to meet their hero – a hero who is always willing to talk to fans, pose for photos and sign autographs.
UNOH president, Dr. Jeffrey A. Jarvis, will be presenting Force with the honorary degree at a special ceremony joined by current students, faculty, staff and special guests. “John Force is truly a wonderful role model and icon in the motorsports industry. He is not only a championship driver, but he embraces a love for the future of the sport which lies within many of our students today,” said Jarvis. “John Force Racing has employed UNOH graduates for many years. It was an easy decision to honor a man that has had such a large impact in the racing industry, business community, and educational environment. We are thrilled to have John Force join the UNOH family”
Force spent nine long winless seasons in NHRA before breaking through with his first victory in 1987, in Montreal. That victory opened the floodgates, as he’s won at least one race for all but one of the 30 seasons since.
Such success led in 2012 to his enshrinement as a first-ballot inductee into the International Motorsports Hall of Fame in Talladega, Alabama. He is also a member of the Motor Sports Hall of Fame of America in Novi, Michigan, and in 1996 was the first drag racer ever recognized as Driver of the Year for all of American motor racing.
“I’m really excited to be honored by the University of Northwestern Ohio. To be awarded an honorary doctorate, that’s pretty exciting. Heck, I only went to college until noon,” said John Force about receiving the recognition. “On a serious note, I’m going to be a car doctor and my life has been drag racing and motorsports. It has also been safety and making sure my kids and all the other racers are safe. The fact that I’m taking my family, going to the University of Northwestern Ohio, and accepting this on behalf of my fans, my family, John Force Racing and all of my sponsors is really quite an honor. I don’t know how they do it but I’ll sure take it.”
The University of Northwestern Ohio is the first university to honor Force in this way. Before the degree presentation, Force will tour the UNOH campus and meet with current students, faculty, and staff.
John Force Racing PR
Post Views: 362
Spread the love

B. FORCE, HIGHT AND M. SMITH CAP OFF VIRGINIA NHRA NATIONALS WITH VICTORIES

MORE TRACK RECORDS FALL AS HAGAN, B. FORCE AND A. SMITH QUALIFY NO. 1 AT VIRGINIA NHRA NATIONALS