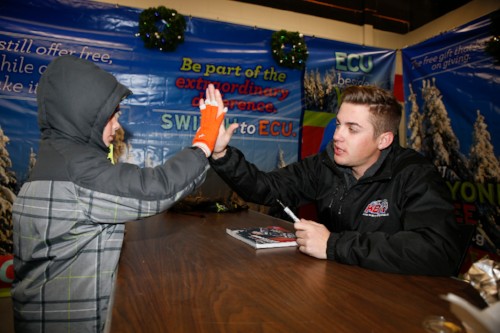 NASCAR rising star Noah Gragson proved that he’s just as quick on a pair of ice skates as he is navigating his way around a speedy race track Tuesday at Bristol Motor Speedway.

The Kyle Busch Motorsports (KBM) driver visited The Ice Rink and toured the Pinnacle Speedway in Lights during his first-ever visit to the tradition-rich light show on a chilly Northeast Tennessee evening.

The Las Vegas native had a blast in The Ice Rink, where he laced them up and competed in two ice skating races against WCYB news reporter Samantha Zarek. Gragson split the two full length races with Zarek, a pretty accomplished skater, and then the two took several laps around the rink in a fun Facebook Live segment.

“I tried to watch Blades of Glory on the way over here, so I was going to try that triple axis out there,” Gragson said with a grin. “But really I’m terrible on ice skates, but it’s a lot of fun.

“If I can race a car anywhere, a shopping cart or race someone on ice skates, I’m going to do it. That competition side of me always comes out. I’m thankful for all of the opportunities I’ve had.”

Gragson also spent some time chatting about his upcoming racing season with several other news reporters from around the region. He said he’s had a blast this season working with team owner Kyle Busch, and was happy with the results of his first full-time tour in the NASCAR Camping World Truck Series.

“It’s a great privilege to drive for Kyle Busch and it was a lot of fun in 2017 and hopefully we can build on that for next year,” Gragson said. “Kyle runs so great here. All the crew chiefs said I did well here for my first time at Bristol. Kyle’s a great guy to learn from and he’s the king of Bristol Motor Speedway as far as I’m concerned. I mean he’s got two triple sweeps here and that’s incredible.”

After leaving The Ice Rink, he and popular track announcer Jose Castillo toured the Christmas lights while performing several songs in their very own rendition of Carpool Karaoke. Songs included Miley Cyrus’ Party in the USA, Wagon Wheelby Old Crow Medicine Show, Elton John’s Rocket Man, the traditional Christmas favorite Feliz Navidad, Under the Sea from the Little Mermaid movie and My House by Flo Rida, in honor of his team owner’s dominating record at BMS.

Gragson finished his evening in the Christmas Village meeting with fans and signing autographs.

During his rookie season he won one race, earned three poles and posted four top-fives. At his first official BMS race in August he started fourth and finished 15th. His goals for next season are to improve on his 10th place points finish and become a title contender.

“It was a good learning experience for me in 2017,” Gragson said. “Obviously we would’ve liked some more of the results on paper to look better. We had a lot of speed. We made a few mistakes, but we win as a team and we lose as a team. Next year I hope to be a lot better. Minimizing the mistakes is the biggest thing and definitely we have the speed, so that gives me a great deal of confidence.”

The Pinnacle Speedway in Lights runs through Saturday, Jan. 6. The event costs $15 for cars from Sunday through Thursday and $20 on Friday and Saturday nights. For $45, guests can take advantage of Jingle Bell Lane, the “fast pass” option that offers a shorter wait time to enter the attraction.

For more information, visit www.speedwayinlights.org. As always, all proceeds for The Pinnacle Speedway in Lights will be used by SCC to give to numerous organizations that serve children in the 18-county area surrounding BMS.