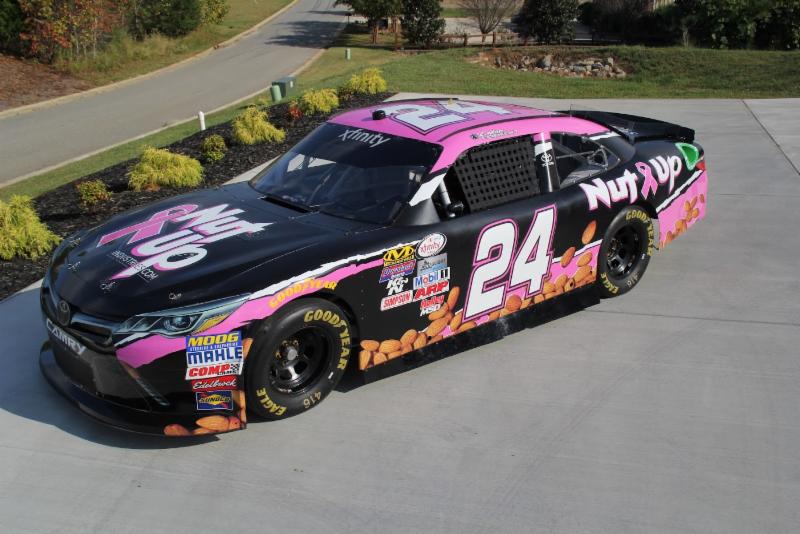 In celebration of Breast Cancer Awareness Month, officials from Nut Up Industries and JGL Racing jointly announced today that NASCAR XFINITY Series (NXS) driver Dylan Lupton will run a special PINK paint scheme in Saturday’s Kansas Lottery 300 at Kansas Speedway on October 21st.
Partnering with Susan G. Komen Greater Kansas City, the No. 24 Nut Up Industries Toyota team has pledged to not only support the foundation, but also create exciting opportunities for NASCAR fans to donate and win limited edition prizes.
“We cannot thank Dylan Lupton, JGL Racing and Nut Up Industries enough for their support and ability to spread our message of breast cancer awareness during October,” said Denise Wiese, Susan G. Komen Greater Kansas City Interim Executive Director. “To have a NASCAR driver, his team and their sponsors get behind a campaign of this magnitude in front of tens of thousands of racing fans is immeasurable. Bringing this issue to light, sharing his day with breast cancer survivors and donating critical funds to support our mission is truly the definition of being More Than Pink.”
By submitting a $24 donation, each donor will be entered to win over 50 prizes including PINK Kansas 300 race-worn gloves, No. 24 PINK tee-shirts, JGL Racing PINK crew shirts and more.
Additionally, each donation made from October 2nd to 17thwill be matched $1-$1 by the No. 24 team and donors will also receive a limited-edition PINK hero card.
“Everyone at JGL Racing is excited and honored to represent Susan G. Komen Greater Kansas City and the great cause behind the Breast Cancer Awareness campaign,” added James Whitener, owner of JGL Racing.  “We commend the efforts of Nut Up Industries and Dylan in wanting to go PINK for this Kansas race.  We look forward to hosting some breast cancer survivors with the team at the track on Saturday while also raising awareness and funds for this cause with the No. 24 Nut Up Toyota.”
The team has also created an opportunity for breast cancer survivors and those currently battling breast cancer in the Kansas City area to have a memorable experience at the race track.
Komen Kansas City has created a link where you can share a story of a loved one or yourself, who has battled breast cancer, and be entered to become a VIP Guest of the team at the upcoming Kansas Lottery 300 on Saturday.
VIP amenities will include: (4) all-access NASCAR XFINITY garage passes, private hauler tour, lunch with the team, pit box seating for the race and more.
Each survivor who is entered will be invited to a special No. 24 unveiling of the special PINK paint scheme on October 19th where they will receive limited edition signed hero cards, meet Dylan Lupton, take photos and write their name on the hood of the No. 24 for race-day in honor of their journey.
“I am thrilled to run this special paint scheme and have this opportunity to support such an impactful organization,” said Lupton. “I know my JGL Racing team is working hard so that we can go to Kansas and have a strong race.”
Live coverage of the Kansas Lottery 300 on Sat., Oct. 21stbegins at 3:00 p.m. (ET) on NBC, the Motor Racing Network and SiriusXM Satellite Radio Channel 90.
ISM PR
Post Views: 509