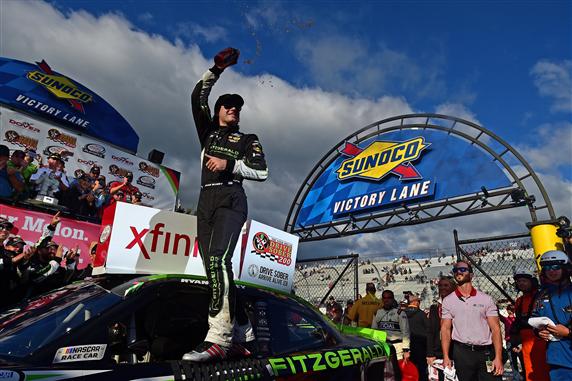 Ryan Blaney fondly remembers coming to race tracks as a child, and having lots of fun during many weekend afternoons.

On Saturday, Blaney turned Dover International Speedway into his personal playground as he earned a victory in the “Use Your Melon. Drive Sober 200” NASCAR XFINITY Series playoff race.

Blaney led 136 laps in the No. 22 Ford, collecting his second NASCAR XFINITY Series victory of the season and sixth overall.

The 23-year-old dominated the final two stages of Saturday’s 200-mile race, which remained caution-free (aside from stage breaks) for the final 171 laps.

“I can’t remember a race here where we ran that long on a green flag,” Blaney said. “[Our team] did a great job of improving the car all day long.”

Allgaier leads playoff grid by three points over Byron, followed by veteran Elliott Sadler (13 points back), Cole Custer (14 behind) and Daniel Hemric (17 behind).

“We knew our car was really good on the long runs,” Allgaier said. “We kept getting messed up on restarts. It was still a good points day for us.”

Byron, who earned the race’s pole position earlier on Saturday, led all 60 laps of the first stage, which included three cautions, including one for a wreck involving Brandon Jones and Jeff Green exiting Turn 3.

“Definitely, the first stage was a ton of cautions and a ton of wrecks,” Byron said. “It definitely mellowed out. Our cars were strong all weekend and we had a good amount of speed. Overall, this is the day we needed.”

Blaney took over from there, as he exited pit road with the lead, grabbed a strong start in clean air, and plowed through lapped traffic on the way to the checkered flag.

“We knew our car had the best long run speed of any car,” said Greg Erwin, Blaney’s crew chief. “As soon as that sun popped out and we got into lapped traffic, we started to distance ourselves. The long green flag run was very important for us. Coming into the lead and being able to restart in clean air tips the scale in your favor at the end.”

Blaney, who said afterward he prefers not to do burnouts after victories, gave the checkered flag to a young fan near the start-finish line. In his post-race news conference, Blaney said he was pleased to see many young fans lining the fences after the race.

“I was a little kid, coming here and watching races,” Blaney said. “Anything we can do to keep people coming back is great. [The kid] was pretty happy when he got the flag.”