Following the July 11 Quaker State 400 presented by Walmart, AMS will break ground on a historic project to create the next generation of Atlanta Motor Speedway and a first-of-its-kind, all-new race experience in 2022.

Following 10 months of confidential research, development, testing and simulation with engineers and iRacing, the reprofile will increase the current 24-degree banking in Atlanta’s turns to 28-degrees – higher than any other intermediate track on the current NASCAR circuit. Straightaway banking will remain five degrees. In addition to the new high banks, the racing surface will become narrower with an overall decrease in width from 55 feet to 40 feet. New widths will be 52 feet on the front stretch, 42 feet on the back stretch and 40 feet in the turns.

The project will pave the way for a bold new era of NASCAR racing in Atlanta.

“As Atlanta’s racing surface has aged, we’ve challenged ourselves to reimagine what NASCAR racing at an intermediate track can be,” said Speedway Motorsports President and CEO Marcus Smith. “With high banks in the turns, narrower width and new pavement technology, Atlanta will be unlike any other mile-and-a-half track on the circuit. It’s all new for ’22 and this will be specifically designed for close, competitive racing.” 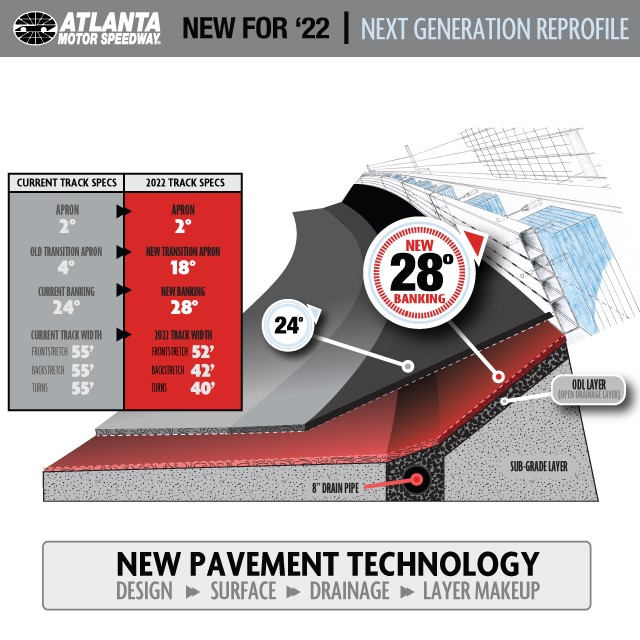 The reconfiguration of Atlanta Motor Speedway is the latest innovative first from Speedway Motorsports, which has repeatedly redefined what’s possible in NASCAR. From the debut of the ROVAL™ at Charlotte Motor Speedway, to the first NASCAR Cup Series race held on dirt since 1970 at Bristol Motor Speedway and NASCAR’s first trip to Circuit of The Americas earlier this year, Speedway Motorsports has been a driving force behind many of NASCAR’s most highly-anticipated events.

Construction is slated to begin the week following the July 11 Quaker State 400 Presented by Walmart, with the next generation Atlanta Motor Speedway making its debut in 2022 in conjunction with NASCAR’s Next Gen car.

“Our partners at Speedway Motorsports have reprofiled Atlanta Motor Speedway to optimize the racing with the Next Gen car, and early simulations suggest the racing will be closer and even more competitive,” said Steve O’Donnell, NASCAR Executive Vice President and Chief Racing Development Officer. “From the Charlotte ROVAL™ to the Bristol Dirt Race and now a re-imagined Atlanta, Marcus Smith and his team continue to take bold, innovative steps to bring unique and exciting racing experiences to our fans.” 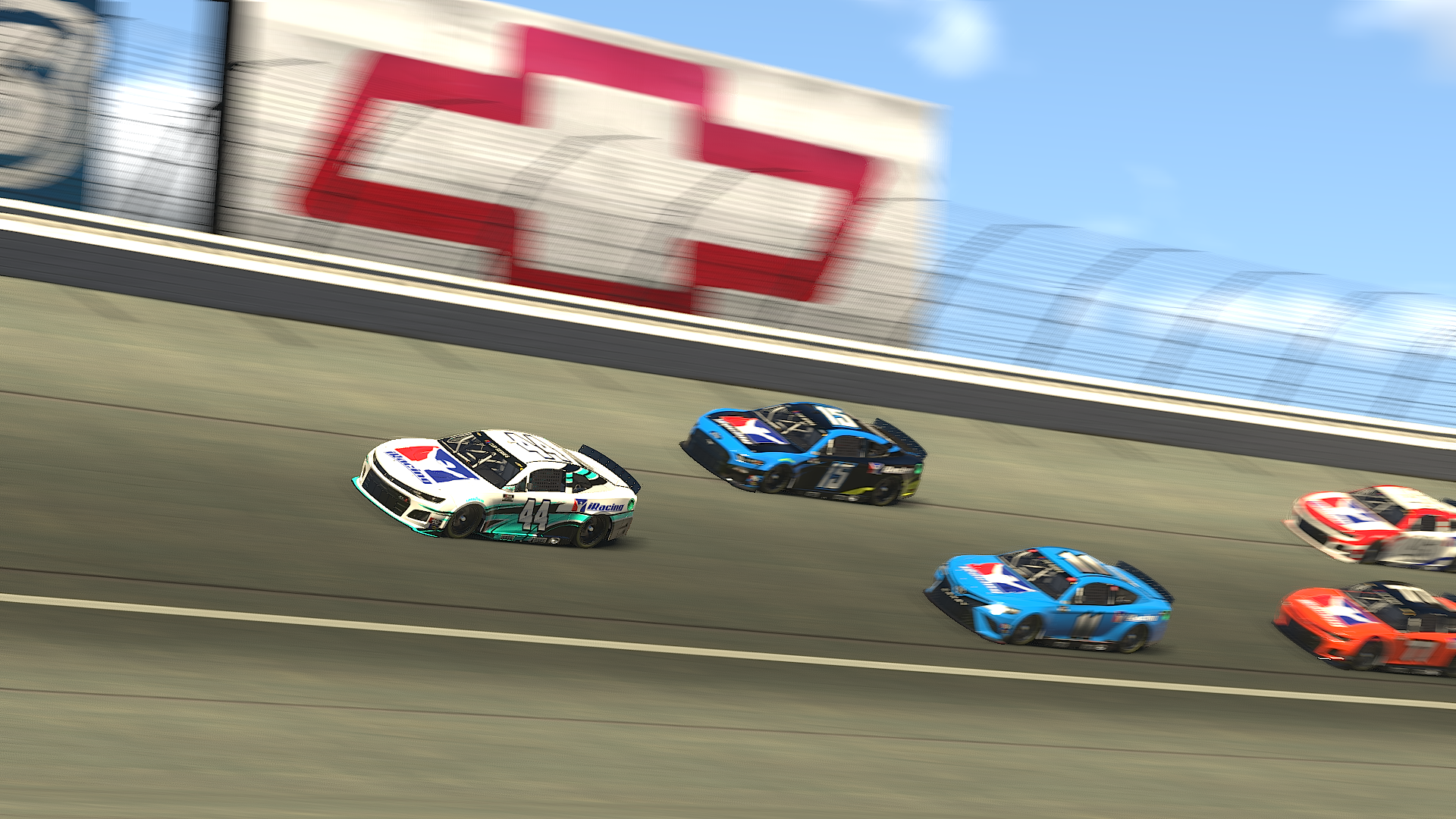 Throughout the development process, Speedway Motorsports has partnered with iRacing to test and verify concepts for the future Atlanta Motor Speedway. The world-renowned motorsports simulator not only provided a virtual rendering of each concept, but also provided key data on how NASCAR’s Next Gen car will perform on the reconfigured 1.54-mile oval.

“Flexing the muscles of our virtual track-building capabilities to prototype Speedway Motorsport’s vision for Atlanta Motor Speedway has been a fun and exciting process,” said iRacing Executive Vice President and Executive Producer Steve Myers. “From one concept to the next, we’ve seen the future of AMS take shape; all without moving a shovel of dirt in the real world.”

AMS has played host to some of NASCAR’s most memorable moments on the current surface, including Dale Earnhardt’s 0.010-second margin of victory over Bobby Labonte in 2000, Kevin Harvick’s emotional and record-setting 0.006-second margin of victory over Jeff Gordon in Earnhardt’s Richard Childress Racing car the following year, Carl Edwards last-lap pass on Jimmie Johnson to earn his first Cup Series victory in 2005, and a legendary battle to the checkers between Gordon and Johnson in 2011.

“Our operations staff has done everything possible to extend the life of our racing surface, and as a result fans have enjoyed some historic moments and fantastic finishes at Atlanta,” said AMS Executive Vice President and General Manager Brandon Hutchison. “While this asphalt cannot outlast Father Time, the memories of the great racing will last forever. NASCAR’s best will have one more chance to add to the legacy of this surface with a grand finale at the Quaker State 400 Presented by Walmart on July 11.”

The NASCAR Xfinity Series gets the first crack at Atlanta’s slick and abrasive track surface during the Credit Karma Money 250 on Saturday, July 10. The weekend is headlined by the Quaker State 400 Presented by Walmart on Sunday, July 11, with Chase Elliott, Kevin Harvick, Ryan Blaney, and the rest of the NASCAR Cup Series’ stars battling for glory.

For more information or to purchase tickets to the July 10-11 Quaker State 400 Presented by Walmart weekend, visit www.AtlantaMotorSpeedway.com.

About the Quaker State 400 Presented by Walmart:

The July 11 Quaker State 400 Presented by Walmart will be the first NASCAR Cup Series race held at Atlanta Motor Speedway in July since 1974. The 400-mile race will be the last on AMS’s slick, abrasive asphalt before a repave and reprofile in 2022.

Preceding the Sunday finale will be the Credit Karma Money 250 NASCAR Xfinity Series on Saturday, July 10. The summer race will challenge the rising stars of the sport to stand out and succeed on one of the circuit’s most challenging tracks.

More information on the July 10-11, 2021 Quaker State 400 Presented by Walmart and ticket availability can be found online at AtlantaMotorSpeedway.com or by calling 877-9-AMS-TIX.

Daytona International Speedway’s Mamie Pollock: Part of the Track’s Tram Tour Specialists Who Love Meeting Fans From All Around the World